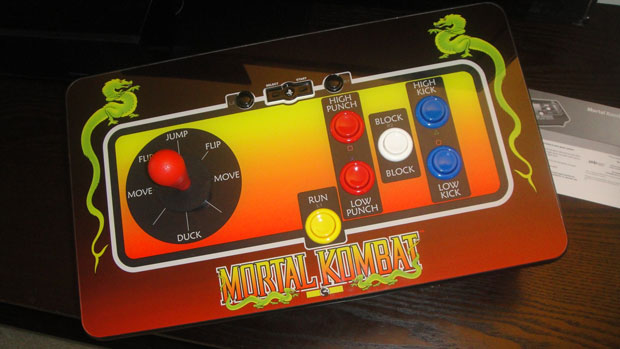 If you remember the 90s, you likely remember spending arcades. Or at least the murky corners of pizza shops and mom-and-pop video stores masquerading as such. Maybe I’m dating myself, but I remember those times fondly. Many of my middle school and early high school days were spent haunting my local video store, Video Fantasy, in Great Neck, New York. It was there I played Mortal Kombat for the first time.

In hindsight, it wasn’t a great game, and maybe even calling it a “good” game would be pushing it. Still, I have fond memories of learning fatalities, trash-talking with my friends (“We’ll find out who the real Sub-Zero is!”), and generally wasting many quarters and hours of my life on Midway’s fighter.

Recently, the downloadable Mortal Kombat Arcade Kollection — featuring the first three games in the series — was released. It’s an attempt to bring those arcade classics home, sans the smelly rooms and sticky floors of arcades of the past. In conjunction with its release, manufacturer PDP has released the “Klassic Fight” stick. Designed to mirror the look and feel of original Mortal Kombat arcade cabinets, the $129.99 stick for the PlayStation 3 brought 90s arcade memories flooding back.

As with the “Tournament Edition” stick released earlier this year with the Mortal Kombat reboot, this thing is a monster. And for the most part, it’s not all that different than PDP’s other arcade stick. It doesn’t flip open to reveal the guts like the “Tournament” stick, but it appears identical otherwise. Designed with Suzo-Happ parts, everything feels just right, with “just right” in this case meaning “like a vintage arcade cabinet.”

Buttons are placed in the same way the original Mortal Kombat arcade’s were configured, with kicks and punches on either side of a single block button. There’s also a run button placed at the bottom, used exclusively for Mortal Kombat 3. I’m a bit rusty with arcade sticks, using controllers almost exclusively for more years than I’d like to admit. With that in mind, I found the buttons to further apart than my man paws were comfortable with; in hindsight, however, the placement seems accurate compared to the real thing.

The stick itself and the buttons are all responsive, or at least as responsive as they can be considering you’re playing Mortal Kombat. Playing through the three classics (a code to download the Kollection is included), it’s obvious that it took Midway and the Mortal Kombat team a few years to get things feeling smooth. The difference between the responsiveness of the original and Ultimate Mortal Kombat 3, with its quick combo system, is mind-boggling.

I haven’t put this thing on a scale, but suffice it to say it’s pretty heavy. Not so much that you wouldn’t be able to bring it to a friends house, but weighty enough that it could get uncomfortable on your lap for long stretches. Fortunately, that issue is mitigated by the soft, agreeable memory foam base. The whole stick feels incredibly solid, something I was able to confirm as I repeatedly smashed my fists against it as I fought the three games’ cheap, Quarter guzzling AI opponents.

Considering the quality of the stick, the $129.99 asking price isn’t really all that crazy. Toss in that code for the Arcade Kollection (which runs $10 on its own), and that sweetens the deal a bit. Problem is, this is a fight stick that’s designed for Mortal Kombat and Mortal Kombat only. While this includes the most recent game, I can’t imagine you’d be able to remap the controls for any of Capcom’s fighters in such a way to make this stick comfortable. Folks who play a lot of retro games on their PS3 may find other uses, but this a luxury controller squarely aimed at Mortal Kombat fanatics.

Check back soon for our full review of Mortal Kombat Arcade Kollection, which is out now for Xbox Live Arcade and PlayStation 3.