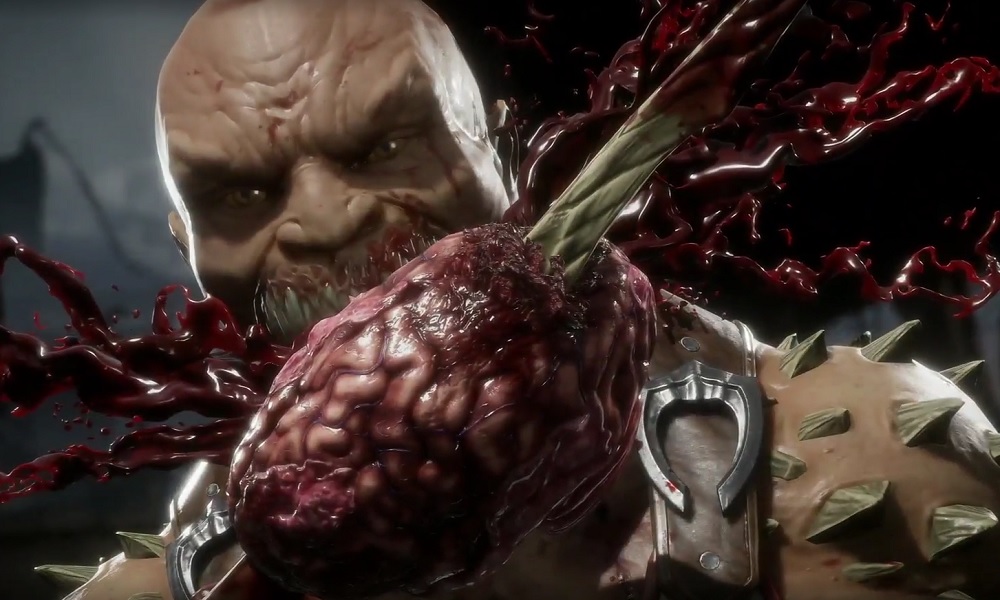 Today, NetherRealm Studios revealed gameplay and more from the upcoming Mortal Kombat 11, which was announced just last month and is launching in April on PS4, Xbox One, PC, and Nintendo Switch. From the star-studded event, held in London and Los Angeles, here’s some of the super grisly info that we know so far.

The character select screen currently has slots for 24 characters. On display in the presentation were the returning Sub-Zero, Scorpion, Raiden, and Sonya Blade. Making their return after a short break are Outworld warrior Baraka and Mortal Kombat 9 DLC star Skarlet, who brings her (literal) bloody mayhem back into the ring. Sonya Blade is being voiced by WWE star Ronda Rousey.

Kung Lao and a restored-from-zombification Liu Kang also appeared in cinematic form during the opening trailer and what appeared to be Kabal flashed up briefly during an interview about the return of streaming show Kombat Kast.

A clip was shown from the next chapter of Mortal Kombat’s crazy story mode. This video featured all-new bad attitude Raiden torturing the messed-up form of MKX boss Shinnok, eventually decapitating him. This is an event which was alluded to at the climax of Mortal Kombat X. We are then introduced to a sinister new female character, Kronika, who appears to have the ability to manipulate time.

Regarding gameplay itself, Mortal Kombat 11 still takes place on a 2.5D plane, featuring one-on-one kombat between two bloodthirsty characters. Movement and combo systems seem unchanged in fluidity, so I’m expecting the return of the MK’s usual “Dial-A-Kombo” control style, as well “pop-up” jumping attacks. EX Meter appears to be split between Offensive and Defensive abilities, and the Super Moves are now known as “Fatal Blows,” still activated by mashing the shoulder buttons. One interesting addition was a “perfect block” mechanic, where defending at the very last second affords the opportunity to counter-attack.

The “Variations” system seems to be returning from MKX, allowing your chosen character to select from different fighting styles, preferencing certain move-sets over others. Character customisation, similar to Injustice 2, is also a thing, allowing for all manner of costumes and looks for your favourite fighter. Of concern were “Augmentation Slots” – shown but not mentioned – which reads to me like potential microtransaction/loot box garbage. But we’ll find out soon enough.

The presentation ended with the reveal of an all-new character, Geras, a hefty monster of a fighter, who appears to have time-manipulation powers similar to Kronika, whom he serves, as well as skills that allow him to shift the sands of time, literally. You can check out Geras in the trailer below.