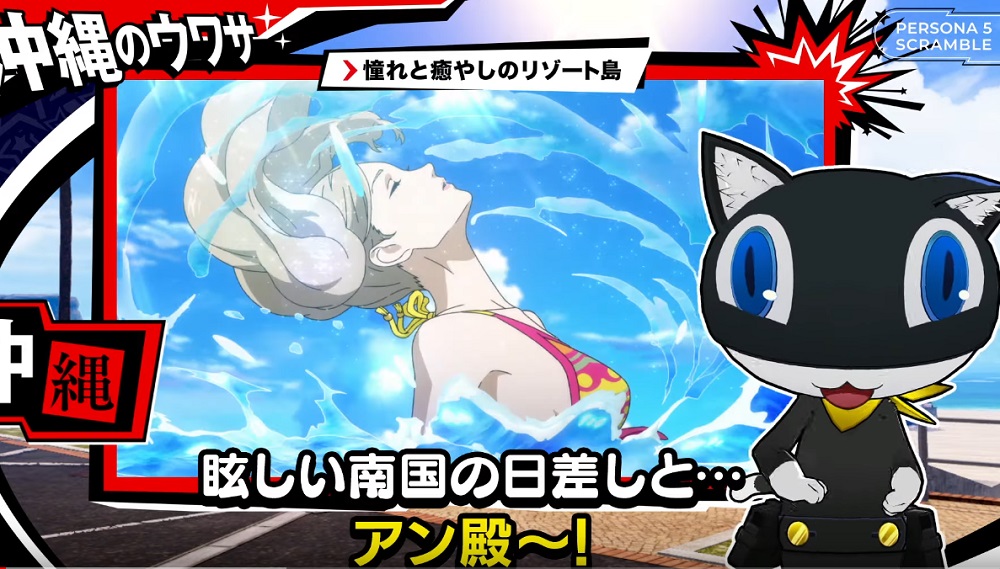 Atlus has dropped the second part of its four-day marketing fest for upcoming action title Persona 5 Scramble: The Phantom Strikers. Today’s video is the next part in “Morgana’s Travel Report,” where the wacky cat takes a look at some of the locations The Phantom Thieves will visit in the new game.

This video sees the shanty R.V. stop off in Okinawa, in particular tourist attraction Kuukojima Island, awash is bright sun and crystal clear seas. Of course, this being Persona, all is not well behind the scenes on this paradise, and a visit to the abandoned Okinawa Jail will see Joker, Lady Ann, Futaba and pals caught up in yet another shadow-filled mystery.

As well as the Okinawa location, the latest Travel Report also looks at Persona 5 Scramble‘s cooking mechanic. By finding recipes and ingredients on their adventures, our heroes can create delicious dishes in “Joker’s Kitchen,” offering stat boosts and other special abilities to the team.

“Requests” also return from Persona 5, essentially optional side-quests that will allow the team to help out individuals with their own personal problems of the heart. I kinda wish The Phantom Thieves would help me out, to be honest, but they’d probably end up blocking my number. Like many psychologists before them.

Persona 5 Scramble: The Phantom Strikers launches in Japan February 20 for PS4 and Nintendo Switch. We’re still waiting on news of a western localisation.