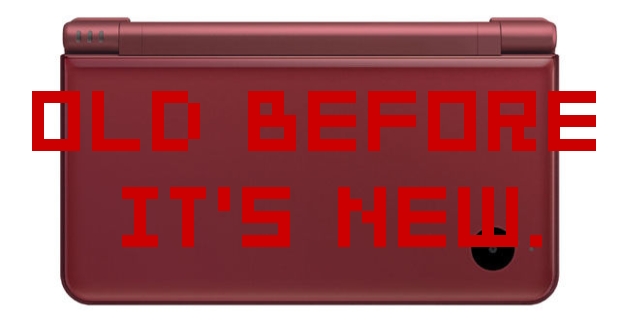 While the DSi XL hasn’t even hit store shelves in the U.S., rumors of a succesor to the DS line of gaming systems have been circulating since last year, when we learned that the new system could be landing this year. Even more recently, we’ve heard rumors of dev kits for the system being in developer’s hands at this very moment. Where better to get confirmation of this fact than at a conference for game developers that is full of said game developers? Raymond Padilla thought just that, and asked around. He got a lot of interesting answers.

According to his sources at GDC, the DS2 is indeed in developer’s hands and they are not having any trouble developing for it. This is because it’s practically a GameCube, power-wise, and everyone knows how to develop for that because they’ve already done it (here comes the Wii insult) twice (burn). This is a little strange, since the DS is a chip-based system, but he reports that “the people familiar with the dev kit made it sound like there wasn’t much of a learning curve on the new system” and that devs who “worked on GameCube or Wii games will find it easy to create with.”

Padilla also gathered that the DS2 has a built in accelerometer and two bigger, higher resolution screens that are closer together so that they can be more easily used as one screen. The biggest bit of news, however, is that the devs all say that they’ll be done with their games by the end of 2010, meaning we very well might be seeing an announcement at this year’s E3 and a roll out of the new handheld by the end of the year.

The DSi is still going really strong, so I’m not sure why Nintendo would need to do this, but as they’ve proven plenty of times before, people are willing to buy new DSes over and over. With the DS2 being an actual upgrade in system power, it wouldn’t surprise me to see this one fly off the shelves just as quickly. I know I’d be getting one.

We’ll end this with one word: RUMOR.

Nintendo DS2 Information Unearthed at GDC 2010 [Raymond Padilla, via Shacknews, via 1Up]