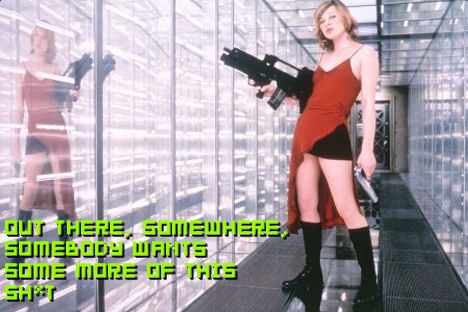 I hated the first Resident Evil movie. It wasn’t just a bad film, it was something that caused me physical and emotional discomfort as I watched it. It was like something Alex DeLarge would be forced to watch, and by the time one of the many “actors” screamed “You’re going to have to work for your meal” at a group of badly presented zombies, I stopped watching. “No more Resident Evil,” I groaned. “Not in my name.”

Sadly, there was more Resident Evil to be had in cinemas, and even though Resident Evil: Extinction Or Whatever They Called The Bollocks was due to be the last film, the series could see an ironic and unfortunate rise from the grave, as Paul W.S. Anderson is considering yet another shameful festival of awful dialog and excuses for moderately attractive women to get their tits out.

“I’m just starting to talk to Sony about it,” Anderson tells MTV. “I don’t even know if anything will come of it, but there’s a possibility it might happen.”

Apparently, the biggest roadblock for Anderson is coming up with the right story, but let’s face it — that’s never stopped him before. Things like this are the reason that I detest Hollywood. Oh sorry, one of the many reasons one could have for hating that screwed-up fairytale world of maniacs and people who are allowed to get away with being utter scumbags because they’re apparently famous.