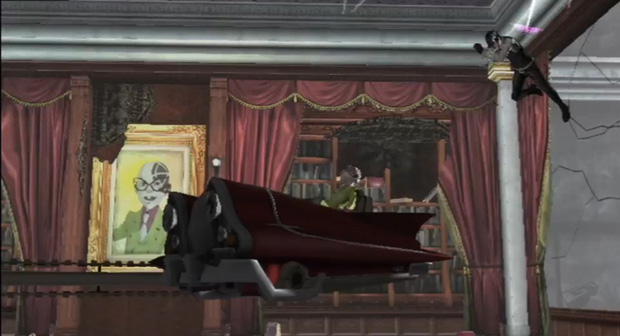 It seems that the bat-a-rang I spotted in the latest No More Heroes 2 video was just the start of the split-second weird moments. For starters, if you pause the video about one second before the bat-a-rang shows up, you can get a semi-clear look at the guy that probably threw it. It’s a little bald man in a green suit  riding in a floating car-type thing with a huge chainsaw sticking out of the front! Who knew?

Some leading experts (meaning people on Gamefaqs and NeoGaf) theorize that this is the new CEO of Pizza Butt, the corporation that bought and remade all of Santa Destroy while Travis was out of town. Their guesses stem from the “p.b.” logo on his door. Personally, I’m just as inclined to think that it stands for “pork and beans“, but who knows?

That’s not all. There is also the revelation that the robot-armed girl at the beginning of the trailer may actually be some sort of cross-dressing, turnip headed boy-monster, a moment where Travis is trapped by a different robot-armed thing, and the sight of a decapitated head for no more than a tenth of a second. It actually looks like Henry’s head, which of course makes no sense because Henry is standing right there as it flies in front of him.

I’ve got my theories, but I want to hear yours. What the hell do you think is going on here?

Filed under... #No More Heroes#Suda 51#WHAAAAAAT?