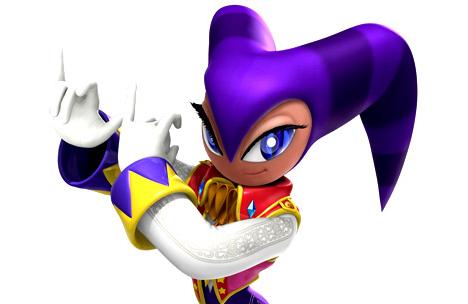 While things have been a bit on the quiet side since the game finally became official, it seems work on the Wii sequel to NiGHTS is coming along fairly nicely.

Gamespot have had a preview of Sega’s sequel to the Saturn classic, and while it seems nothing was playable, early word sounds pretty positive. It sounds at the moment as if the new outing sticks fairly closely to the format of its prequel (not that there’s a thing wrong with that), but is upgraded and enhanced not only by Wii remote control, but also some rather interesting spins on the boss battle formula …

Hit the jump for the details.

The boss shown in the presentation took the form of a giant anthropomorphic bouncing ball, and had to be herded along a course to a final goal rather than fought in the traditional sense. This more abstract approach to boss encounters is apparently one of Sega’s main goals for the game, and if this kind of creative thinking is being pushed throughout the whole experience, things bode well for the end product.

Sega also announced that the game is to draw parallels with Jungian dream theory, and while we can currently only boggle over how they’re going to integrate an influential psychological theorum into video game design, it’s definitely another sign that they’re not taking their most pined-after sequel lightly.

Graphically though, while the game’s looks have improved over what we last saw, particularly in terms of the main character model, backgrounds and environments still look a little sparse and flat, and a fair few jaggies remain loitering around the place. Here’s hoping Sega give it a thorough polish before the Winter release.

Check out the gallery.