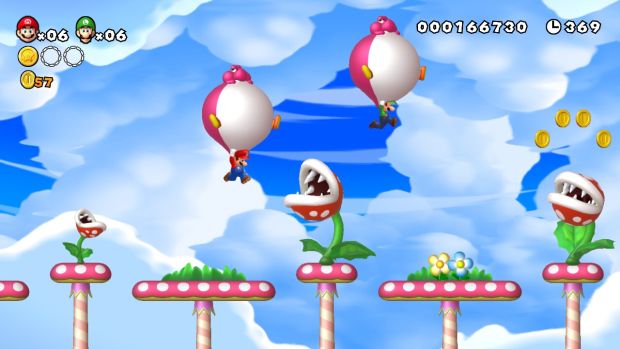 Nintendo has detailed all the other modes you can expect in New Super Mario Bros. U. Challenge Mode will feature Time Attack, Coin Collection, 1-Up Rally, and Special. One example of a challenge is clearing a level without touching a coin. It’s like they saw that one YouTube video and were like “HEY LET’S MAKE THAT A FEATURE!”

You’ll also be able to save replays in this mode, but you probably won’t be able to upload your videos because that’s just asking too much from whatever Nintendo’s online service turns out to be.

Additionally, there’s Coin Battle mode where players have to collect the most coins. The person on the GamePad can actually design the coin layout in this mode, which is kind of neat. Lastly there’s Nabbit, where players have to catch a character named Nabbit in levels. If you’ve caught him then you’ll be given a special P-Acorn which lets you fly continuously through stages.

The last bit of new info is that the World Map will be like Super Mario World’s. The world is seamless, and you can go through the game in a nonlinear fashion. So you’ll recycle the Super Mario World’s overworld but it’s too much to bring back the feather cape?

Nope. I’m not bitter AT ALL.