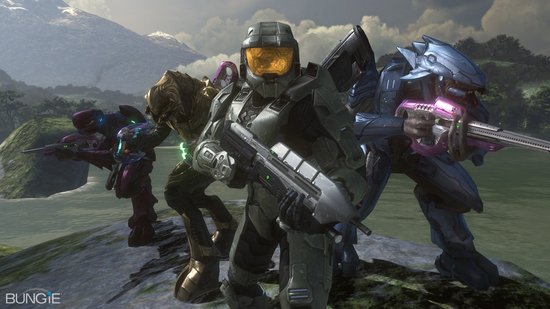 Bungie is just full of surprises. We told you earlier today of the big Halo 3 news confirming four-player online co-op. Now Bungie goes into greater detail on how four-player co-op will work and the new Elite characters joining the Chief in single player:

Acting as a team is a fantastic new twist to the Campaign gameplay – something that works as well on foot, in close confines as it does on the battlefield, with large scale vehicle mayhem. Scared of Jackal snipers? Send out a scout to see what dangers lie ahead. Terrified of an open field? Flank your enemies and swipe their rides. The combinations and scenarios are endless – and you’ll be able to enjoy them time and time again in Saved Films of your co-op exploits.

Luke Smith also lets slip that all four players will have identical abilities. So unless Bungie finally throws out the Chief’s flashlight, the Elite’s can’t use their cloakingability.

One last interesting note to point out is the final thing Luke had to say in this update:

So there you have it. Mystery solved. Internet dramas ended.