Last week, you got to read Anthony’s hands-on with the latest from the team behind the Bit.Trip series. Gaijin Games has a lot in store for fans of the franchise, and you can bet there is going to stylish fun involved.  As one of the few game studios to not only rock the WiiWare service, but to make it successful, they really know how to make games that people want to buy and play.

Anyway, after some private hands-on time with the game, and a long chat with the creator of the game, some new news has come forth. Cross overs, soundtracks, and even a special lady for Mr. Commander Video himself are all just small details added to this game. Follow the jump for more.

Talking with Lead designer Alex Neuse, these guys have a lot of neat references to the previous games in the series. As it turns out, those beats from the Bit.Trip Beat and Core are actually resources being collected on the first zone of Runner, the Moon stage. This is followed by a refining world where the raw beats become the resources of the Bit.Trip universe. Finally, the last stage series is a derelict city stage, where the beats have shown their destructive nature. 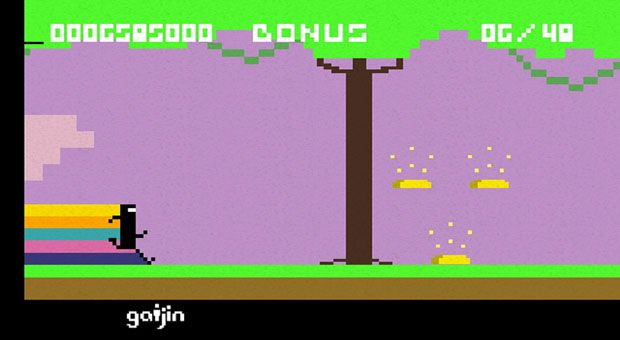 In reiteration of Anthony’s commentary, the levels are very dynamic, much more so than previous titles, with 3D figures moving from the background forward. The music is just as good as before, and plenty of references to other Bit.Trip titles. Also, fans will be glad to see a bonus mode, where title character Commander Video runs through a level entirely designed to look like Pitfall. There is very specific artifacting and snow that shows up, and visual bugs that really take things to the next level.

Now, Anthony was disappointed by the lack of a Nether mode, a state where the game forces you to enter a black and white mode where you can easily lose. This was a conscious decision from Gaijin Games, as they wanted to evoke the idea that, with life, you’ve got to keep trying until you succeed. These almost existentialist theorization continues with the destructive nature of the beats, how they destroyed the city that Commander Video traverses. Sure, most people are not going to care too much, but hardcore fans will eat it up. 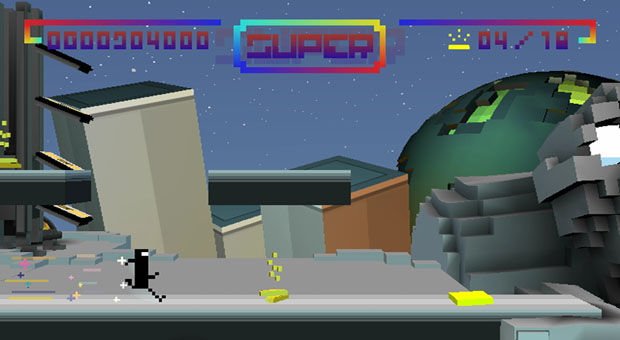 Another big addition for fans of the franchise is the addition of new characters that will become much more important in the last two games. First, Super Meat Boy himself makes an appearance, standing in the background of a couple of stages. Expect to see more of these crossovers, as Team Meat works literally blocks away from the Gaijin crew. Also is the addition of a female Commander Video, whose name is still being finalized, a robot called Radbot, and a little guy called Junior Melchkin. Oh, and there’s one level called “Non Trotski,” a nice reference to Jonathan Holmes of this very site.

Finally, Neuse was ready to show off one of their latest games to, get this, be published by the company. Called Lilt Line, it’s currently available on the iPhone, but a specialized version will be coming to WiiWare soon. Coupled with the announcement of the Core soundtrack coming to CD Baby and iTunes, it is clear that Gaijin Games knows how to not only make WiiWare fun, but successful as well.