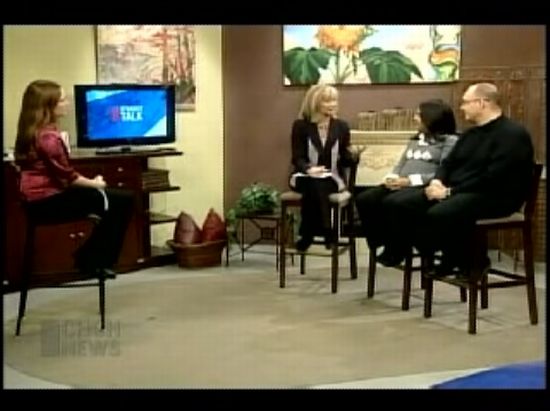 Guess CHCH TV loves me, because in less than a week since my last appearance they invited me back to appear on another show called Straight Talk with Connie Smith. Straight Talk covers the hot topics in the news and in this show, Connie was diving into the wonderful of the Wii.

Covering the panel of experts this time around was President of Silicon Knights, Dennis Dyack, Endocrinologist, Dr. Mira Luther and myself as the professional videogame blogger. I was there to demonstrate the Wii and show Connie how to play it. I was the official booth babe, I guess.

Hit the jump for the videos.

Everyone pardon my rambling, but it’s hard not to sound like a weirdo when you’re trying to explain to a room of professionals that your boss is a robot. Heck, I don’t even think Dennis Dyack even knew what Destructoid was. I know someone who’s getting a bad review in the future …

I apologize for all the videos but the segment is 30 minutes, and we had to break them up into 5 parts. Note that in part four, there’s a promotional video for Silicon Knights and Too Human that I believe no one has seen on the Internet yet.

Part 2 – Rambling about robots and blogging

Part 3 – The next generation of videogames with rabbids. DAHHHHHH!

Part 4 – Sneak Peek at Too Human

Part 5 – Teaching Connie how to play the Wii