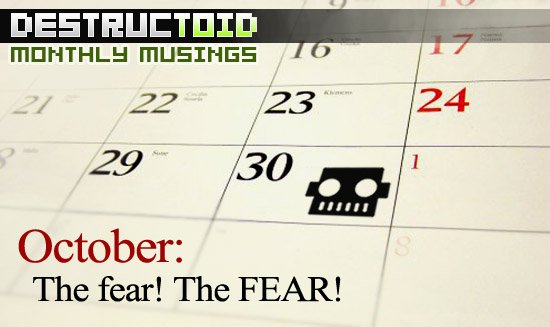 The naysayers said a whole bunch of nays when last month’s topic went up, but, as always, you guys delivered: you talked about stuff you hated without devolving into flaming or trolling, and we got some interesting discussion out of it all.

Where last month was all about hatred, this month is about my other favorite emotion — fear. “The fear! The FEAR!” asks the question, what scares you in videogames?

I don’t just mean in terms of horror games, but what makes you nervous, uneasy, frightened, or terrified in games in general? Is it the nervousness one feels while playing a bullet hell shmup? The feeling of reloading during battle? The tenseness of waiting in the shadows to pounce on a guard? Which videogame antagonist terrify you? Or, is there not enough fear in videogames?

Hit the jump for further explanation of the theme.

Firstly, make sure to put “The FEAR:” in your c-blog title, and secondly, check the Monthly Musings tag before you set it live.

Since this is a pretty vague theme, I’ll point out a past article written by Dtoid staff that would still apply: this one, by Ashley Davis,  is about her real-life fear of virtual water. Though the article is more about Banjo-Kazooie than Silent Hill, it includes a pretty indepth explanation of the poor girl’s true terror toward murky water in videogames.

Similarly, Jonathan’s post yesterday on underpowered game protagonists had a couple of interesting references to the terror inherent in controlling a weak-ass protagonist who can’t go all Niko Bellic whenever he feels like it.

Though I’m definitely looking forward to reading some articles on survival horror games, those don’t represent the beginning and the end of this theme: there are a lot of things that have potential to scare us and, perhaps just as importantly, a lot of things that sadly don’t, but should.

Anyway, yeah. Pretty vague theme, and you can more or less come up with your own definition of what “fear” is (I’d personally say that really, really epic scenes make me somewhat “fearful,” if only because they give me a sense of  scale and how small I am in relation to the world I’m playing in), but I remain interested in seeing what you guys come up with.