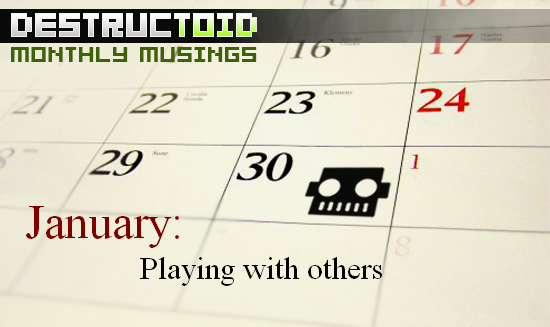 First of all, happy new year.

Second of all, this month’s topic revolves around multiplayer games. Deathmatches, party games, fighting games, what have you — everything’s up for grabs. The topic itself is simple, but broad:

Yes, that is technically three topics. When I say broad, I mean broad.

Anyway, you can hit the jump for a further explanation of the theme (with some examples), and the directions for how to get your themed article promoted to the front page.

Off the top of my head, I sort of want to write about Left 4 Dead, because I’m goddamned unoriginal. If you think about it, almost all multiplayer games are made up of what marketing buzzwordophiliacs would call “procedural narrative”; there’s no actual story to CounterStrike or Team Fortress 2, but this frees us up to create our own and focus on the immediate events of the game.

When you talk about the time you killed eight guys in four seconds in cs_office, you’re telling a story, even if it hasn’t been meticulously plotted and structured by someone sitting at a typewriter (and by the way, please feel free to devote articles to telling these types of muliplayer-based stories). There are, of course, notable upsides and downsides to this sort of structure. This month’s theme just makes me think about how Left 4 Dead sort of turns that on its head, while still keeping certain essential aspects of the multiplayer experience intact.

Or, you could talk about the competitive nature of something like Super Smash Bros Brawl, and how the dynamics involved in trying to learn wavedashing or whatever-the-fuck are unlike any in other games, or other mediums.

The only rules are these: make sure to tag your community blog with the “Monthly Musings” category, and make sure to put “Playing with others: blah blah blah” in the blog title.

That’s all. Any questions, comments?