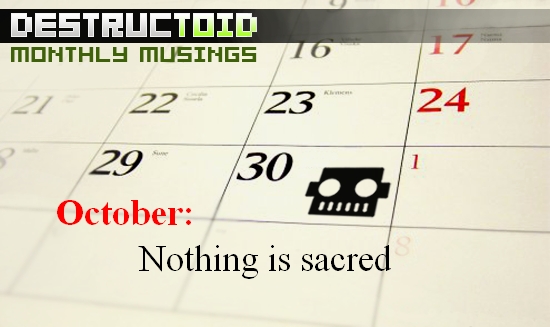 Another month, another opportunity for you — yes, you — to have your thoughts promoted to Destructoid.com’s front page, merely by responding to our Monthly Musing theme.

I stole an idea from Michael Todd for this week’s Rev Rant, and I’m going to rob him even further by essentially rephrasing a question he proposed to me a week ago.

Certain ideas or gameplay mechanics define the genres to which they belong. For whatever reason, particular design concepts are considered “standard” for certain genres, to the point where both designers and gamers either refuse to break away from them, or have become so accustomed to their presence that the thought of branching off and trying something entirely new never even crosses their mind.

They are sacred cows. And they must be slaughtered.

What mechanics have become so standard, so generally accepted as representing “good” game design, that you just want to throw them out the window entirely? In your opinion, which current gameplay conceits represent artistic dead ends?

Hit the jump for a further explanation of the theme, and instructions for posting.

Sign up for a (free) Destructoid account, and write a community blog. Simple as that. Choose the “Monthly Theme” tag for your cblog, and put “Nothing is Sacred: blah blah blah” in the title.

You can tackle this theme from a very, very broad perspective (“why are so many action games about killing stuff”), or you can focus on what others might consider minutiae (“why do action games revolve around machine guns and explosive weapons when highly lethal, realistically-designed semiautomatic pistols could be much more satisfying).

The challenge here comes in trying to re-examine things most people consider universally “good” game design, and turning them on their heads. It’s easy to complain about stuff you don’t like from genres you’re not terribly fond of (as my Rev Rant proves), but it can be even harder, and even more interesting, to look at genres you really care about and try to deconstruct which ideas or mechanics are stifling creativity and innovation.

Does that make any sense?