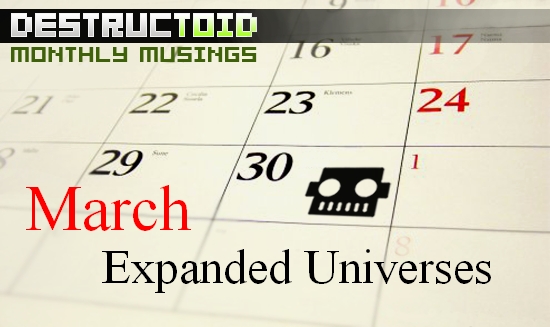 It’s time for another Monthly Musings — the monthly community blog theme that provides readers with a chance to get their articles and discussions printed on the frontpage.

For better or worse, nerds, like no other social group, just love to see more of their favorite places and characters than their source material allows. Film fans don’t yearn to watch a two-hour spinoff of The Godfather focusing solely on what Bonasera does before and after his “I believe in America” speech. Fans of Crime and Punishment don’t wish for a seven-hour miniseries detailing Raskolnikov’s experiences in the Siberian prison. Yet, gamers will absolutely eat up stuff like Resident Evil Degeneration, or the Halo novels, and they might even attempt to expand their favorite universe themselves through the power of fan fiction.

This month’s Musings topic is about that obsession, or curiosity, or perversion, or whatever you wanna call it. Even though videogames are generally quite good at establishing their own living, interactive environments, it’s never enough. Why is that? Why do you love, or hate expanded universe stuff? Does The Super Mario Bros Super Show even count as expanded universe?

Hit the jump for a further explanation of the theme, and some possible angles.

I’m a bit worried that this theme may be too general — anything that would allow for both the Diablo extended universe novels and Link squealing, “excuuuuuuse me, Princess” frightens me. Still, you guys have done quite well with previous months, so I have the utmost belief that you’ll be able to save my lousy theme with not-lousy cblogs about it.

As always, make sure to use the Monthly Theme tag when making your cblog, and put “Expanded universes: blah blah blah” as the title.

I’m half considering writing about my one (ONE!) piece of videogame fan fiction I wrote as a child. The less shameless part of my personality thinks maybe I could talk about how seeing Sgt. Slaughter on the Super Mario Super Show was consistently awesome for a violence-obsessed 6-year-old, and only now do I find it all kind of silly and hilarious.

Or, how about an analysis on what expanded universe novels can do that videogames can’t? Or the reverse — an argument that expanded universe comics and movies are really superfluous marketing-based moneygrabs whose information is either totally irrelevant to the game story or should have been included in the actual game through actual gameplay?

Any questions, comments? Clarifications on the theme?