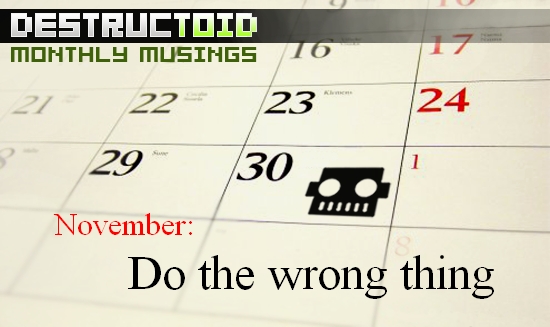 It’s ubiquitous. It’s poorly-defined. It’s sexy. And, depending on who you talk to, it’s a common ingredient in most video games.

From Shadow of the Colossus to the (admittedly out of context) snippet of Modern Warfare 2 we saw a couple weeks ago, modern games are showing a greater willingness to force the player into compromising situations, and either ask, allow, or encourage them to do that which two decades of heroic plumbers and one-dimensional villains have implicitly taught us never to do: to commit evil acts.

Sometimes, games ask us to do evil out of necessity (Far Cry 2); sometimes, out of love (Shadow of the Colossus); and sometimes, because it’s just plain goddamn funny (Dungeon Keeper). This month’s musing topic is meant to make you consider how the concept of doing the “wrong” thing has infiltrated modern gameplay, and the subsequent implications.

Hit the jump for a further explanation of the theme.

Go to our cblogs, get an account, and when you write your post make sure to title it “The wrong thing: blah blah blah” and choose the “monthly assignment” post tag.

You can take this month’s theme in several directions.

What does “evil” even mean in regards to videogames, where violence is our primary mode of expression? Is Nathan Drake “evil” just because he kills a lot of people? If not, why not? And if so, does this really matter all that much since “it’s just a game”?

Which evil-centric games utilize concepts of selfishness or immorality in interesting ways? What do they offer that less morally ambiguous games do not?

The medium being as demonized as it is by the mainstream news outlets and trigger-happy politicians, what is the place of horrifying or evil gameplay in modern design? Much of the community has been talking around this issue in regard to the leaked MW2 video, and you could take it in a direction of your choosing once the game’s actually out.