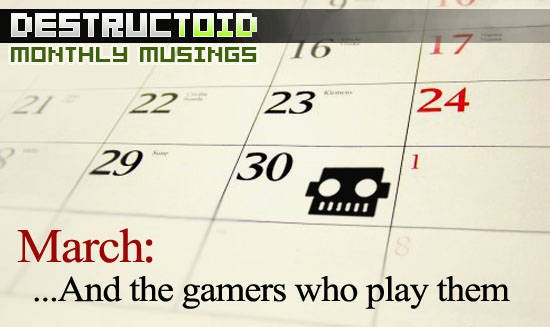 I gotta say, I was more than impressed with the amount of submissions we received for the first installment of Monthly Musings. We received some incredibly intelligent submissions which provoked genuine debate, and nobody even posted any pictures of their penises. For the most part. But that’s the past — another month, another Monthly Musings topic, another opportunity to get your work featured on the front page.

This month, the topic is “…And the gamers who play them,” focusing on videogame subcultures, cliques and clans. We all love videogames, but some of us show that love in different ways than others. Your job for this month is to analyze the videogame subcultures which mean the most to you, good or bad.

Want to hold up die-hard Smash Bros fans as the epitome of what competitive gamers should be (“no items, Final D only”)? Go right ahead. Feel like making fun of LARPers, but in a logical, scientific way? Be my guest. Feel like defending Halo and Madden fans? It’s your choice.

Hit the jump for a further discussion of the theme.

I must stress, that this month’s topic is not an excuse to just bash a random group of gamers without rhyme, reason, or support. I can quite easily say that all furries are terrifying and should be neutered, but why? I haven’t supported my argument and I haven’t made any real point.

Furthermore, you shouldn’t feel pressured to just rant and bitch about subcultures. Why not point out some gaming groups that you love? We’ve all heard thousands of rants and cynical complaints about most subsections of the gamer elite — it’s rare nowadays to hear some legitimately positive, hopeful, and (dare I say it?) happy discussion on a game subculture. Yeah, everyone hates XBox Live gamers; why not talk about die-hard adventure game fans instead? Positivity is unusual, and therefore sexy.

Literally any game-related subculture is up for grabs, here. Religious anti-game legislators, 8-bit artists, competitive gamers, whatever. If you’re going to write on the fanbase of a single game — let’s say you’re going to take the easy route and attack Halo fans — then be sure you comment on the gamers themselves, not the game they play. If you were to denounce Halo fans as shallow gamers, don’t spend six paragraphs just talking about how much of a letdown Halo 3 was (though that can certainly be a part of your argument). It’s “…and the gamers who play them,” not “…and the games they play.”

As always, you can make your post anytime within the month of March; just be sure to title your cblog “And the gamers who play them: Blah blah blah.”

Just like last month, the most interesting articles which spark the most debate will be promoted to the Dtoid front page.

Any questions? Feel free to hit the comments.

Filed under... #Opinion Editorial#Things gamers do