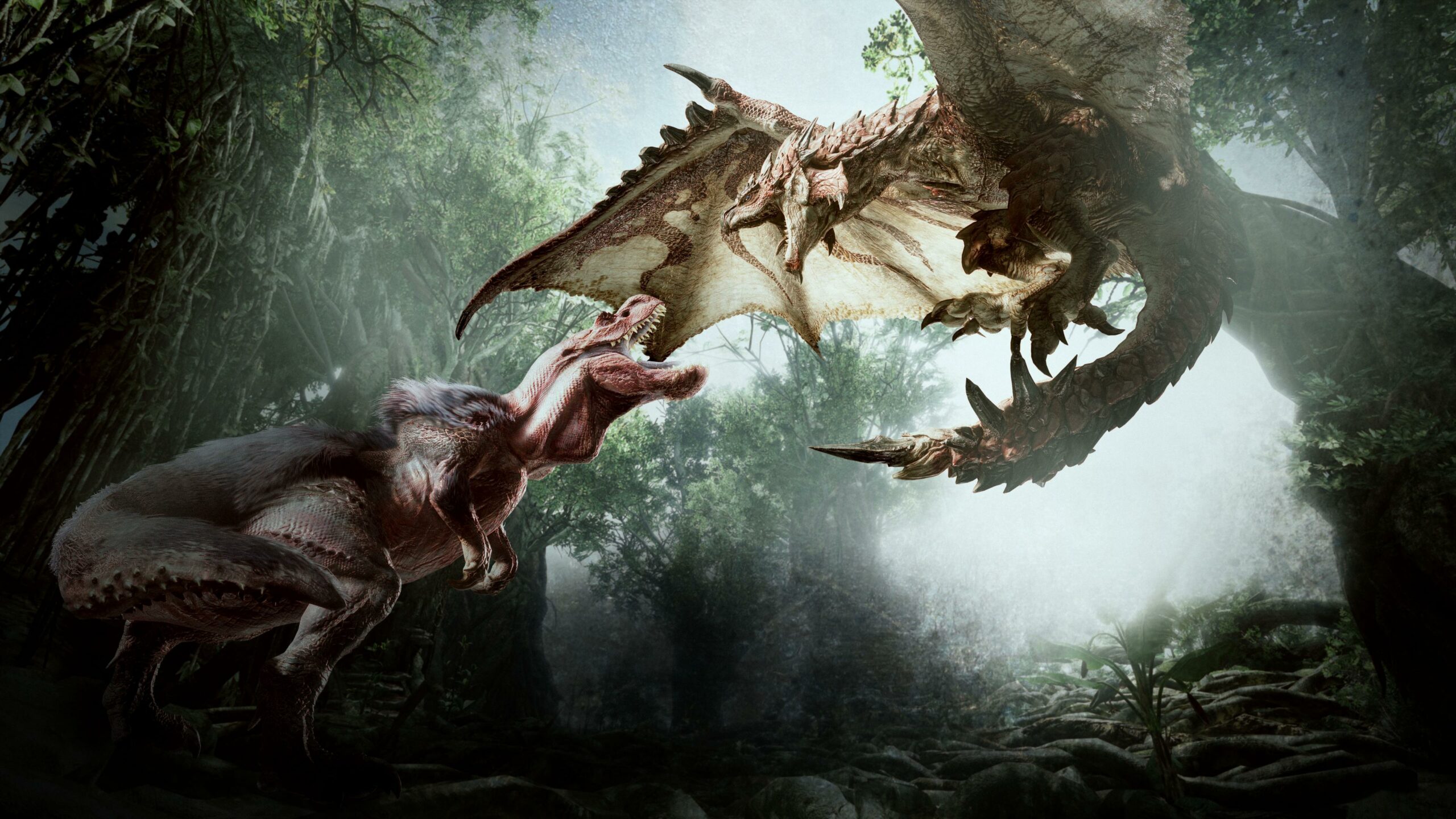 I’ve been loving every minute of Monster Hunter: World since it released last week. After ducking the beta, staying clear of a lot of pre-game footage, and generally going in as an unprepared schmuck, I’ve had a wonderful time getting acquainted with this strange new world.

One thing that was apparent right off the bat is Monster Hunter is extremely complex. There are tons of different weapons (many of which incorporate alternate modes or special tricks), endless items to horde, and all kinds of crafting craziness that, frankly, seemed like nonsense the first time I looked at the upgrade tree at the smithy.

So to be completely honest, I kind of ignored a lot of those things starting out. I got in, picked a fun dumb looking weapon, and got straight to hunting and slaying monsters. Turns out you can get pretty far just relying on traditional gaming basics. Dodge and swing, chug a potion when you get hurt, that sort of thing. I was doing just fine.

Until I was tasked to take on the Anjanath that is. 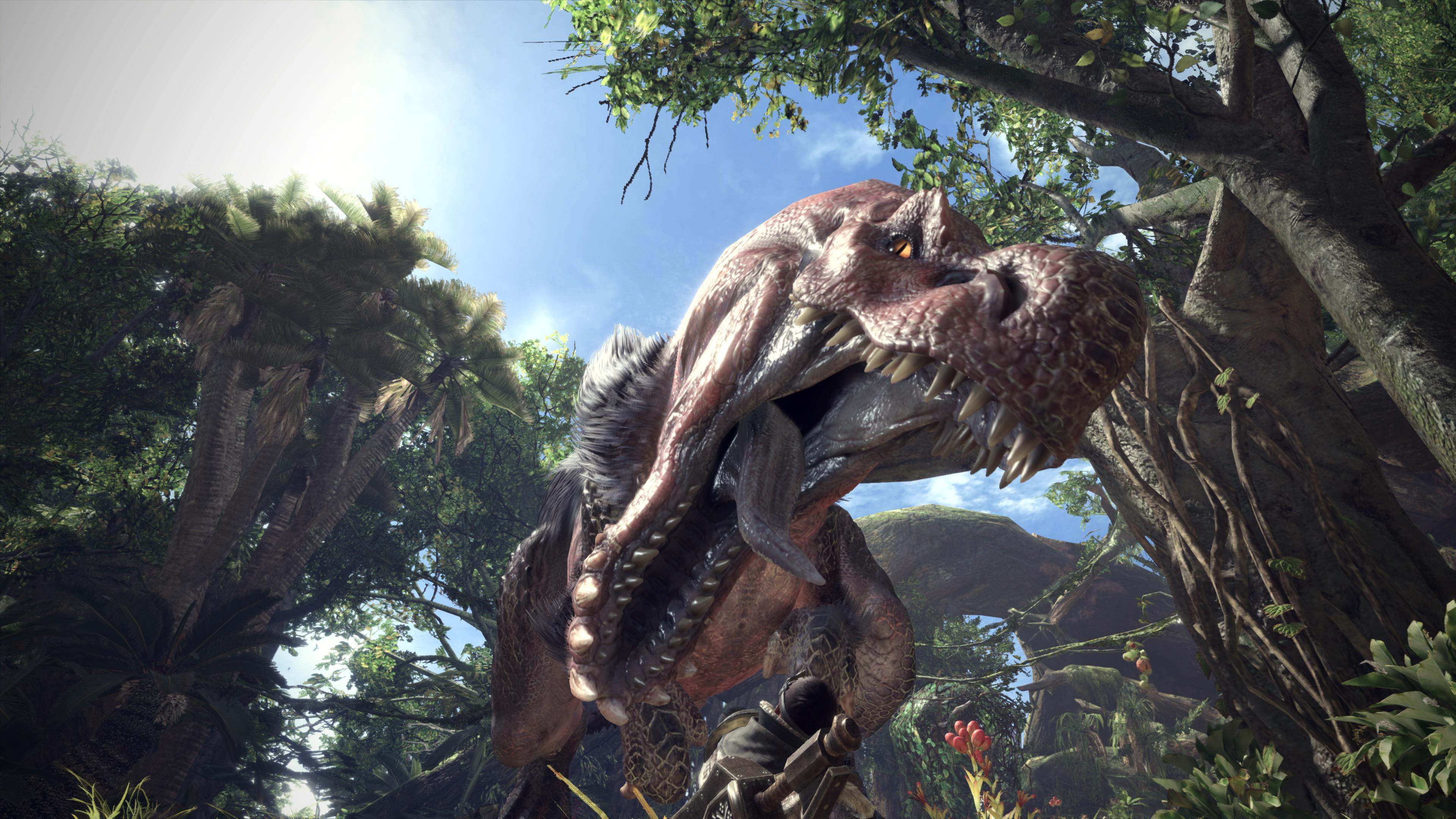 If you’re unfamiliar, the Anjanath is essentially a T-rex that can breathe fire. It stomps around the Ancient Forest like a drunk looking for a fight, ready to pounce on unsuspecting hunters, lowly Jagras, and even other giant monsters. You’ll probably see it a few times while doing other things in the forest and, if you have any sense, you’ll beat a hasty retreat just as soon as you do.

A few hours into the game though (or maybe a dozen if you’re like me and spend a lot of time messing around and answering SOS flares), you’re given the main storyline quest “The Encroaching Anjanath” and have no choice but to go toe-to-claw with one to protect the town.

While several of the other monsters at this point in the game are faintly ridiculous (the chicken-like Kula-Ya-Ku isn’t likely to give anyone nightmares), the big purple dinosaur is no joke. The Anjanath is much faster and more aggressive than any of those other beasts, and it has the power to back it up. It has an arsenal of tail swipes and kicks that make it difficult to try and attack him from the back, but those attacks are far preferable to the alternative. You do not want to be in front of it when it’s breathing fire or snapping away with those huge jaws. Turns out that’s a good way to end up charbroiled. 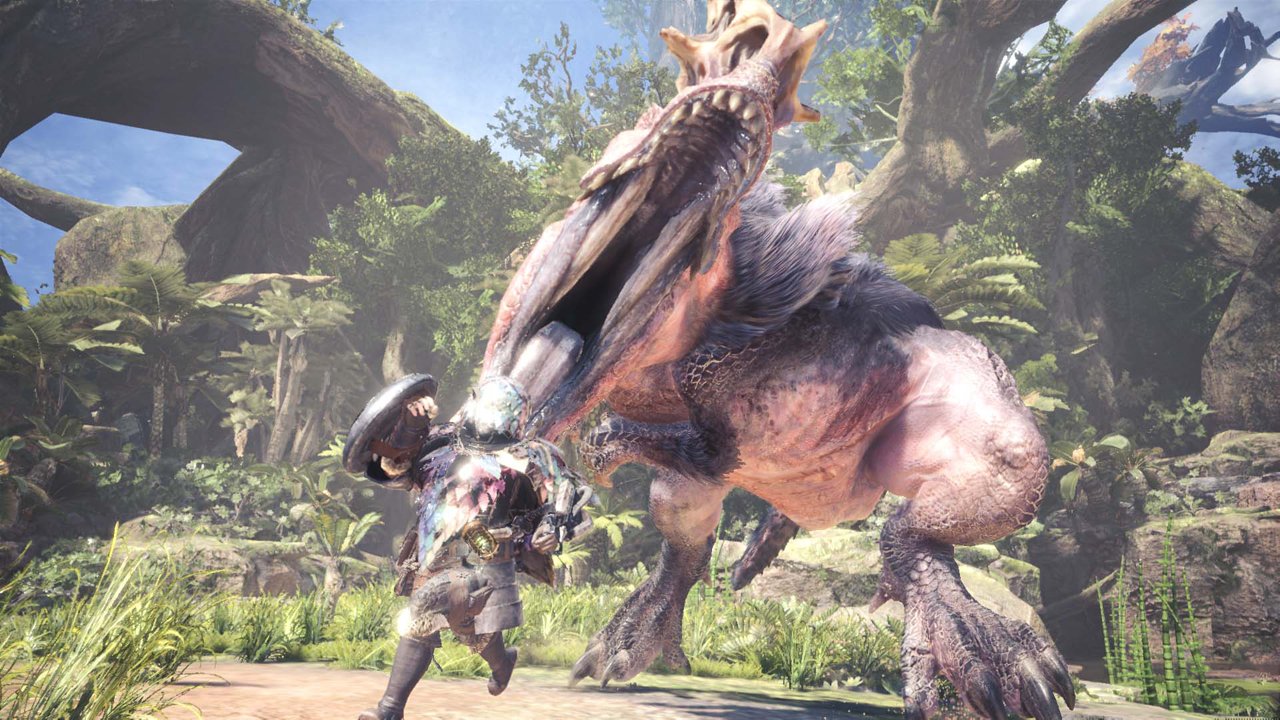 I tried taking it on solo, but the typical dance of dodging and counter attacking didn’t work. I’d dodge a big charge, stumble over and scrape it with my big clumsy switch axe once or twice, and it would turn around on a dime and delete half my health bar with one nasty burst of flame. It sent me packing in embarrassingly short order. This was the first quest I actually failed out of.

So I tried again, this time popping an SOS flare for a little back up. It was a massacre, a “Yakety Sax” comedy of a big giant dinosaur chasing after a pack of clowns as they tripped over each other retreating, falling into a cowardly dogpile. I tried again with another team, and this time the fight had barely begun before two players waltzed into the same firebreath attack and fainted simultaneously. This Anjanath was beginning to become a problem.

It was clear I wasn’t going to beat this thing just swinging my axe around and hoping for the best. I needed an advantage. So I went back to town, dug through my item box that was swollen to bursting with various leaves, bones, and bugs I’d been busily collecting but never bothered to actually use. I finally browsed through the crafting list I ignored earlier and discovered, duh, there were some pretty helpful looking items I could make! Things like Mega Nutrients and Energy Drinks that could increase my HP and stamina caps. I’d seen a few other hunters use the pitfall and electro traps while teaming with randos, so I figured it was time to learn how to make a few of those as well.

I cracked the spine on my Monster Guide and looked up what it had to say about the Anjanath. Most of it was fairly obvious, but it was good to confirm its weak points (go for the throat!) and it got me thinking about my equipment.

Till then, I’d mostly been building my armor and weapons based on what had the biggest numbers or looked the coolest. The Anjanath made me finally pay attention to the elemental defense rating of my gear, and what kind of damage my weapon inflicted. Turns out bone armor is good against fire, and I was already wearing the rib bone jacket for coolness sake, so it was no problem to make the rest of the set. I made a new switch axe with a water element bonus while I was at it.

Before setting out I not only loaded up on items, but optimized my backpack menu to rotate smoothly through the various buffs, seeds, and traps at my disposal. I even actually paid attention to the canteen options and crafted a custom meal for the best HP and damage bonus. 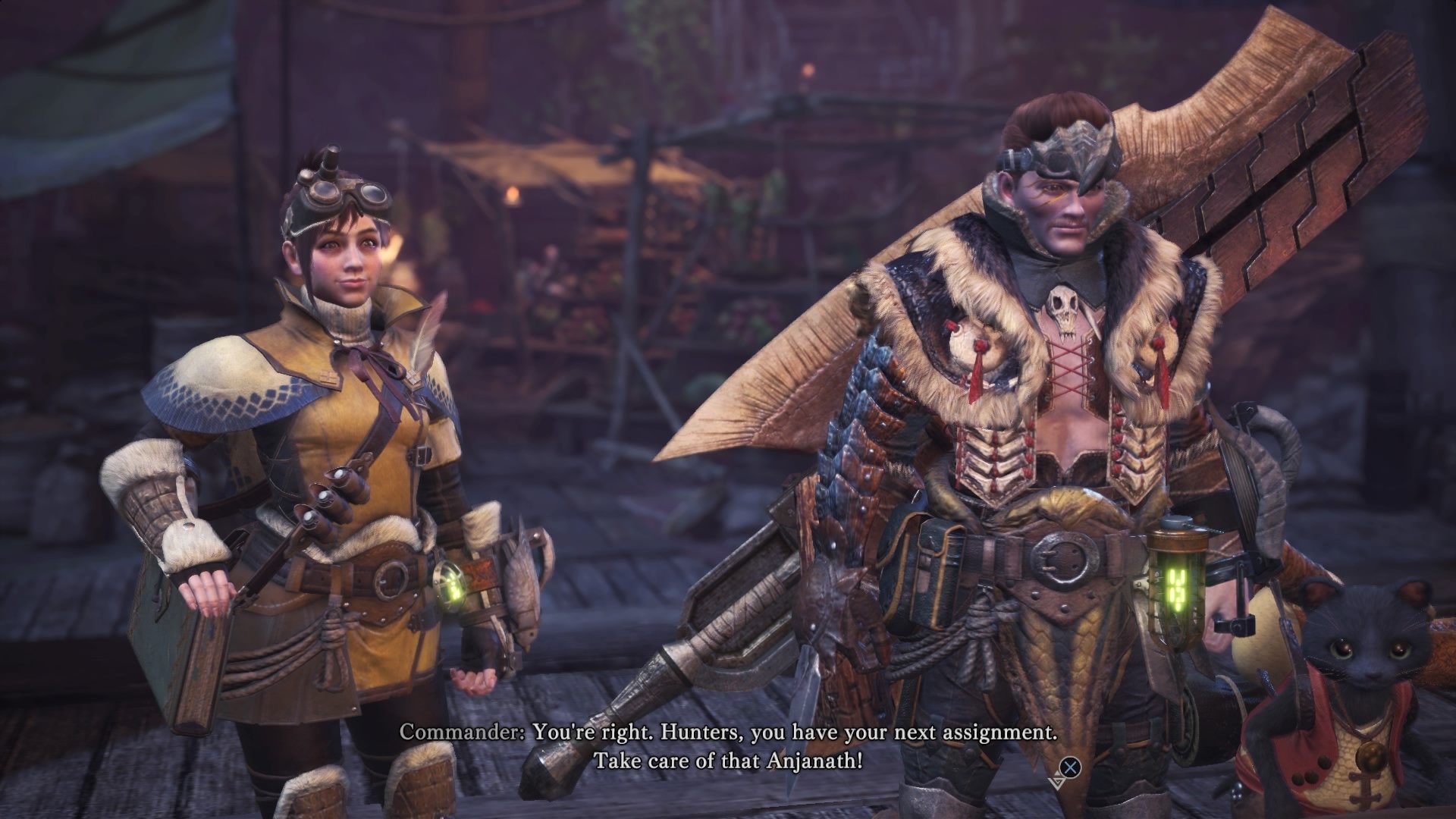 No prizes for guessing how things went after that. With a belly full of HP and stat bonuses, a pouch heavy with traps and tricks, and decked out head to toe in equipment specifically designed to counter the Anjanath, I walked back into the forest and easily slaughtered the beast. Why did I even think this was hard?

Monster Hunter gave me just the kick in the ass I needed at just the right time. Because of course, none of the things I did to prep for the fight were particularly special. In any other game, bringing the right items to a fight would be a natural move. Checking out your equipment’s stats and making sure it’s suited for the area or enemy is a basic RPG strategy. Exploiting weak points is as old as the first pixelated blinking red light. None of these are new or overly complicated ideas on their own.

What makes Monster Hunter so daunting is the sheer number and breadth of systems it throws at you at once. The gigantic item and crafting list. The multiple pouches, radial menus, and controller shortcuts you have to learn. The glut of crafting options and dependency on making your gear instead of finding it naturally as you progress (making you stingy and hesitant to waste materials). The variety of monsters with their various weakpoints, abilities, and strategies. It’s too much.

And the game knows it’s too much. That’s why it doesn’t demand you engage with all the systems right off the hop. Like I said, you can get pretty far just by knowing enough to roll out of the way of attacks and sneak in your own hits like any action game. But just when that started to get a little boring, when I started feeling a little too comfortable, along came the Anjanath to nudge me towards a deeper understanding of the game. 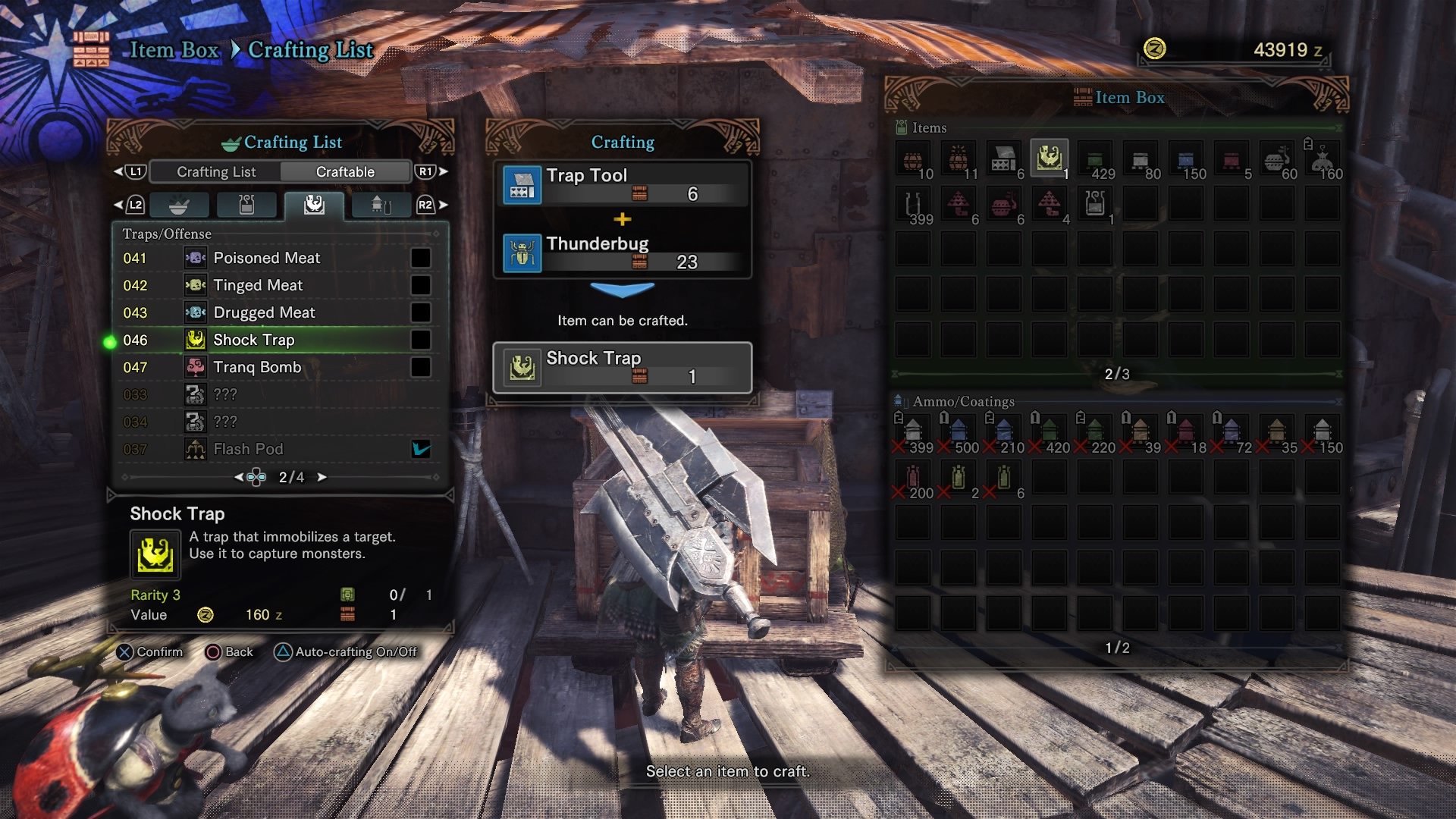 I’m certain this was an intentional speed bump too. The Anjanath represents a very specific difficulty spike that seems intended to say “no really, it’s time to learn about some of these things.” It’s anecdotal, but I noticed more than a few people on Twitter complaining about the old dino giving them trouble. The hunt for the Anjanath is the only quest I’ve seen multiple groups fail at (and I should know, I spent a whole evening answering SOS calls for the quest and farming the beast after learning how to take it down, and the results were almost 50/50).

It is a perfectly paced wake up call. You can encounter an Anjanath in the wild pretty early in the game and likely learn firsthand how deadly they are, but the mission to finally track one down doesn’t happen until you’ve put down a few kinds of giant monsters under your belt. You’ve slain the Pukie-Pukie, tackled the rock encrusted Barroth, and tangled with the waterborne Jyuratodus. You’ve gone to a whole new area and expanded your horizons. When you get the call to return to the Ancient Forest to finally take on the big dog, it feels like a right of passage. This is the time to get serious.

It teaches you things that you should probably know at that point of the game. Things like “hey dummy, maybe bring a few of those might and adamant seeds cluttering up your item box” or “you know you can just make traps, right?” It reminds you that you get a ton of crafting materials if you’re even vaguely diligent about rooting through the occasional bonepile or mining outcrop as you twaddle about. You can afford to make a few sets of armor and an extra weapon type or two (or twenty). 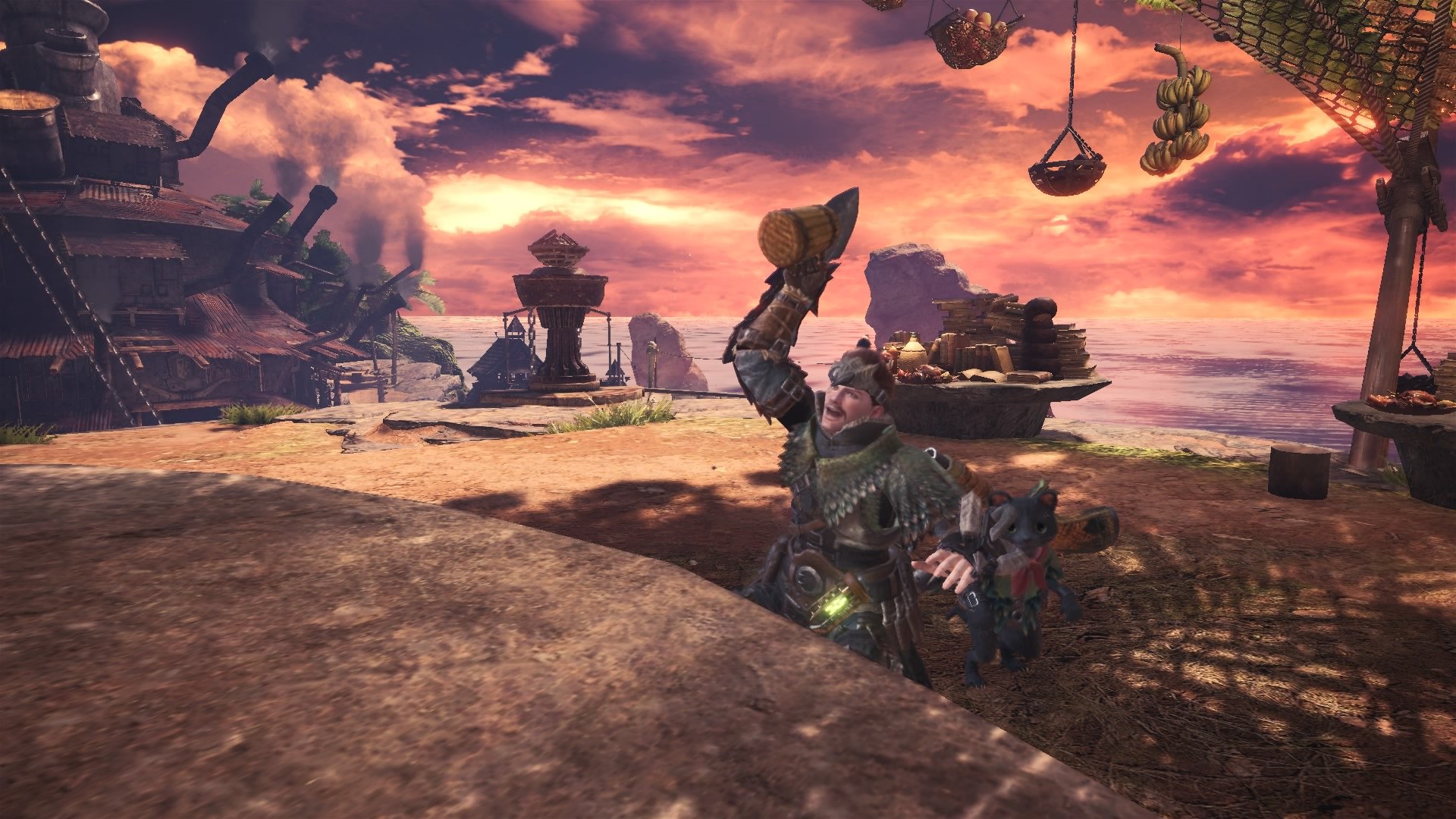 Now, another dozen hours and quests later, I’m starting to feel that nudge again. I won’t spoil it for anyone not there yet, but nearing the end of the main storyline you’re introduced to a few new nasty surprises that can catch you off guard. Environmental hazards that deplete your health cap, bleed afflictions that make it almost as painful to dodge an attack as it is to get hit by one, enemies with very specific defenses (and weaknesses). But it’s no big deal, I know I have everything I need to rise above the challenge. All it takes is a little bit of preparation.

Monster Hunter: World is filled to the brim with tutorials, tool tips, and video demonstrations, but the Anjanath was what finally taught me what the game was about. Guess I owe something to that big purple bastard.