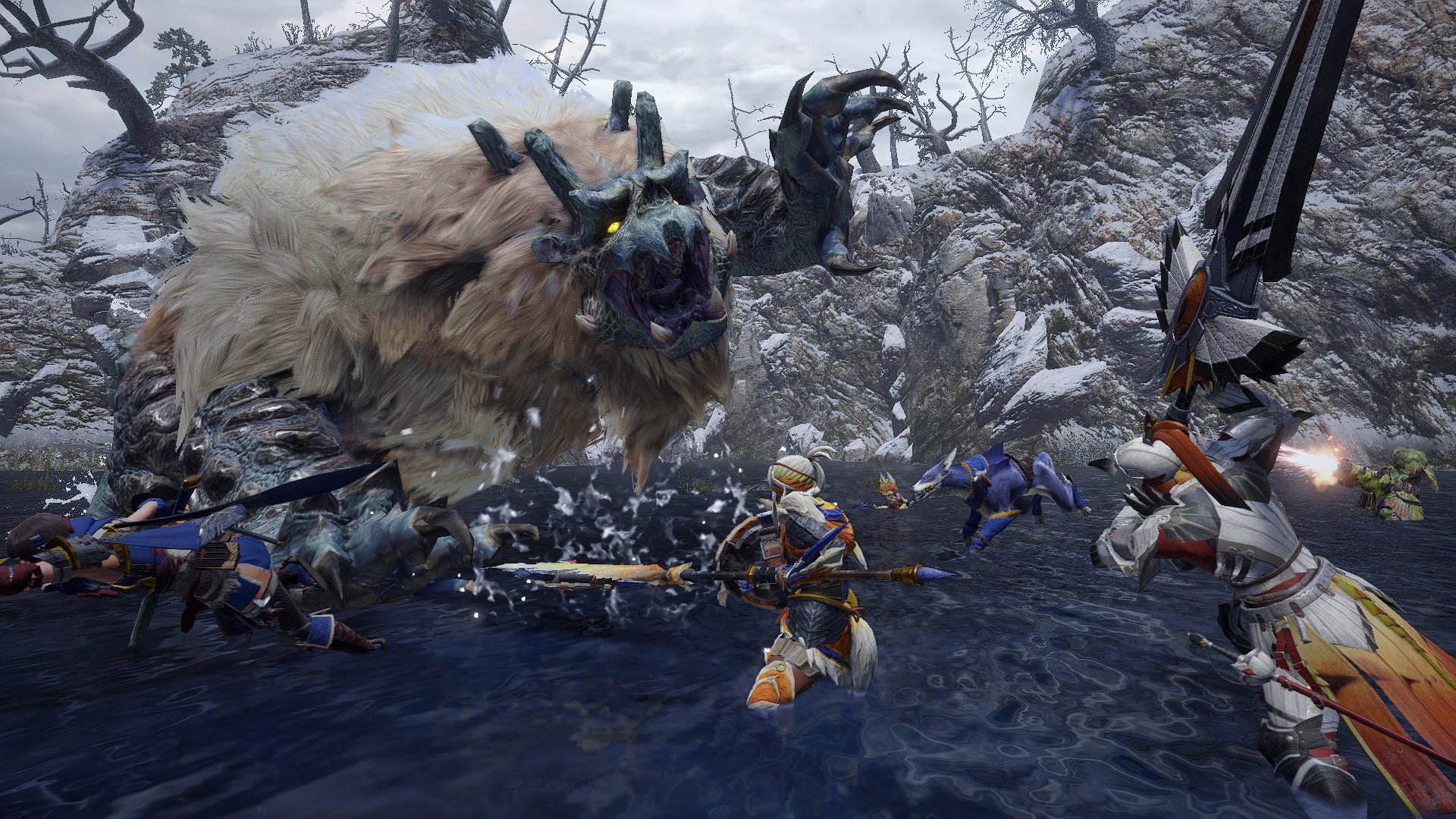 [In this community blog, Destructoid user Moths delves into why the Monster Hunter series still has so much goodwill after 15-plus years, and why players keep coming back for more without burning out. The hunt can’t stop. -Jordan.]

We live in an era of effectively infinite games. Whatever your tastes, it has never been easier to find a game you’ll enjoy and to play it. It’s true that there could always be more: more variety, more quality, better preservation of old titles. But ultimately the fact of playing games in this day and age is that there is already more than you need in your entire lifetime. And yet they just keep coming.

That can be overwhelming. Presented with such a vast territory, there’s an impulse to come up with ways of dividing and traversing it. We create or are presented with niches for ourselves: loyalties, habits, aversions, etc. Shortcuts. Maybe you don’t play racing games, maybe you often play whatever happens to be on PlayStation Plus. The zeitgeist is a big one. There’s always a handful of games that have enormously more cultural traction than the rest… until they don’t. But that’s the crux of it: an external force that is able to answer the question “what should I play next?” whenever it is called upon to do so.

Personally, I’m a little uncomfortable with that. For one thing, the games of the moment are usually new, and the industry is such that a game at launch is typically both more expensive and worse than that same game two years later. Coming late to the party has become a smart move if you’re more interested in the contents of your glass than you are in the ability to clink it.

I also just don’t like the idea of letting somebody else tell me what to play. And I really don’t like the idea of letting the sum of everybody else do it. I’ve ended up designing a little system designed to give me a balanced gaming diet while alleviating the burden of choice. This is completely neurotic behavior, but fuck it. It works. I enjoy games more with my nonsense than I did without it.

Anyway, Monster Hunter Rise is the only thing I’ve played since it came out.

It wasn’t supposed to be this way. I’m supposed to be playing Anodyne 2: Return to Dust. But they got me, just like they got so many of you. Monster Hunter wins again. Just like it did with World before this, and with Generations before that.

Why does this keep happening? Well, here are some ideas:

Monster Hunter has been good and growing for so long now that it’s earned a rare amount of trust. It has seen ups, downs, and unpopular changes, but never a real blow to the collective confidence. Never an Assassin’s Creed: Unity or Cyberpunk 2077 moment. Perhaps never even anything on the level of, say, New Super Mario Bros. 2. Something fine but worryingly tired.

The faithful have been given little cause to waver, in other words, and so little cause to stop loudly talking about how good Monster Hunter is every time it comes out. Case in point: this post. I had every reason to believe that I would love Rise, so I bought it, and I do. And now I’m all the more likely to do it all again next time.

Monster Hunter is basically on the same schtick as every MMO or live-service game. It’s a huge, repetitive timesink that greets you with a feast and then tries to hook you up to a drip-feed. It makes early adoption appealing by offering new content at a measured pace, in theory making for a satisfying sense of keeping up with something over time without ever feeling overtaxed by it. Sadly, we’ve been conditioned to distrust this way of doing things — it so often heralds everything that’s ugly and artless about the business of games. An attitude that doesn’t care if you’re having fun as long as you’re playing, and doesn’t care about burning bridges as long as the toll booths still work.

Things feel different with Monster Hunter, especially since World. Less like extortion and more like hospitality. There’s no pressure, and everything’s free except for expansions of a size that feels fair to pay for. There’s no attempt to convince you that you have to stick around or pay up beyond the point at which you’ve had your fill: all that’s coming is more Monster Hunter, after all. More monsters, more gear, more grinding. Take as much as you like and leave the rest. It’s a strategy based fundamentally on wanting players to like the game. Players who like the game keep playing, keep talking about it, keep seeing the cross-promotions you put in it, and keep buying the next one.

The other aspect of Monster Hunter‘s lifecycle is just as simple: there’s a gap. For all but the most diehard of players, there is a long enough wait between the point at which you drop off with one game and the point at which the next comes out. Exactly long enough, in fact, for you to start thinking that you could really go for a new one. That’s probably not an accident. You get the sense that MH‘s creators know what their ecosystem can sustain and know that respecting those limits is in everybody’s best interests.

So… hear me out on this one. Monster Hunter is not a game about collecting monsters. That’s true. But it sure is a game about a collection of monsters, and it’s very good at it.

Just like Pokémon, every new Monster Hunter comes with a mixture of new creatures, old favorites, and old not-so-favorites. Every new entry has some stock roles that will be filled by new creatures: Pokémon has the starters, the early route bugs, birds, and normal types, the cover legends. Monster Hunter has a new dumb lizard to serve as the first large monster, a new flagship, some new Elder Dragons. Both franchises will try to revitalize or capitalize upon older creatures by giving them new variants. There’ll always be a new region with a new cast of lovable helpers and a new pretense at a story, and all of it will be strikingly similar to the previous generation.

The difference is that an individual monster is way more fully realized than an individual Pokémon. Pokémon gives itself relatively few tools with which to work, and often doesn’t even make the most of those. What’s with those models and animations? Those cries? In Monster Hunter, everything about a given creature paints a coherent picture. That’s the way it moves, its attacks, its look, the gear you can make out of it: everything. And you’ll spend enough time with each that you get to see it. Even the ones that frustrate you do so with growing familiarity. A pet peeve is still a kind of pet.

Perhaps the simple way to put it is that Pokémon often only leads you to build a relationship with the members of your team and a handful of other standouts. The rest aren’t much more than noise. Monster Hunter lets you build that relationship with most of the cast. It helps that it takes ten times longer to hunt a monster than to catch a Pokémon, and that there are ten times as many of the latter. You end up knowing Rathalos in a way that you can’t know Rattata.

And the thing is, Pokémon still works! Hell, it really works, despite being kind of dubious these days. I think Monster Hunter brings a more potent version of the same appeal to a smaller audience. There’s something homey about opening up a new quest list and seeing who’s there: a knitwork of continuity and novelty that gets thicker and fluffier every time you come back to it. The world’s a scary place. Can’t say no to a good blanket.

And that’s my Monster Hunter Rise post. It’s not quite coherent, but that’s fine: I don’t think we get graded on these. The upshot is that this franchise seems to be turning into a bit of a masterclass in how to handle a long-running series. Enough so that even this inveterate contrarian is happy to drop everything and jump back on the bandwagon. I also just really like fantastical dinosaurs.

What about you? What’s a game that always gets you to bite? I’d love to hear about it. Feels like there could be some good stories in there.