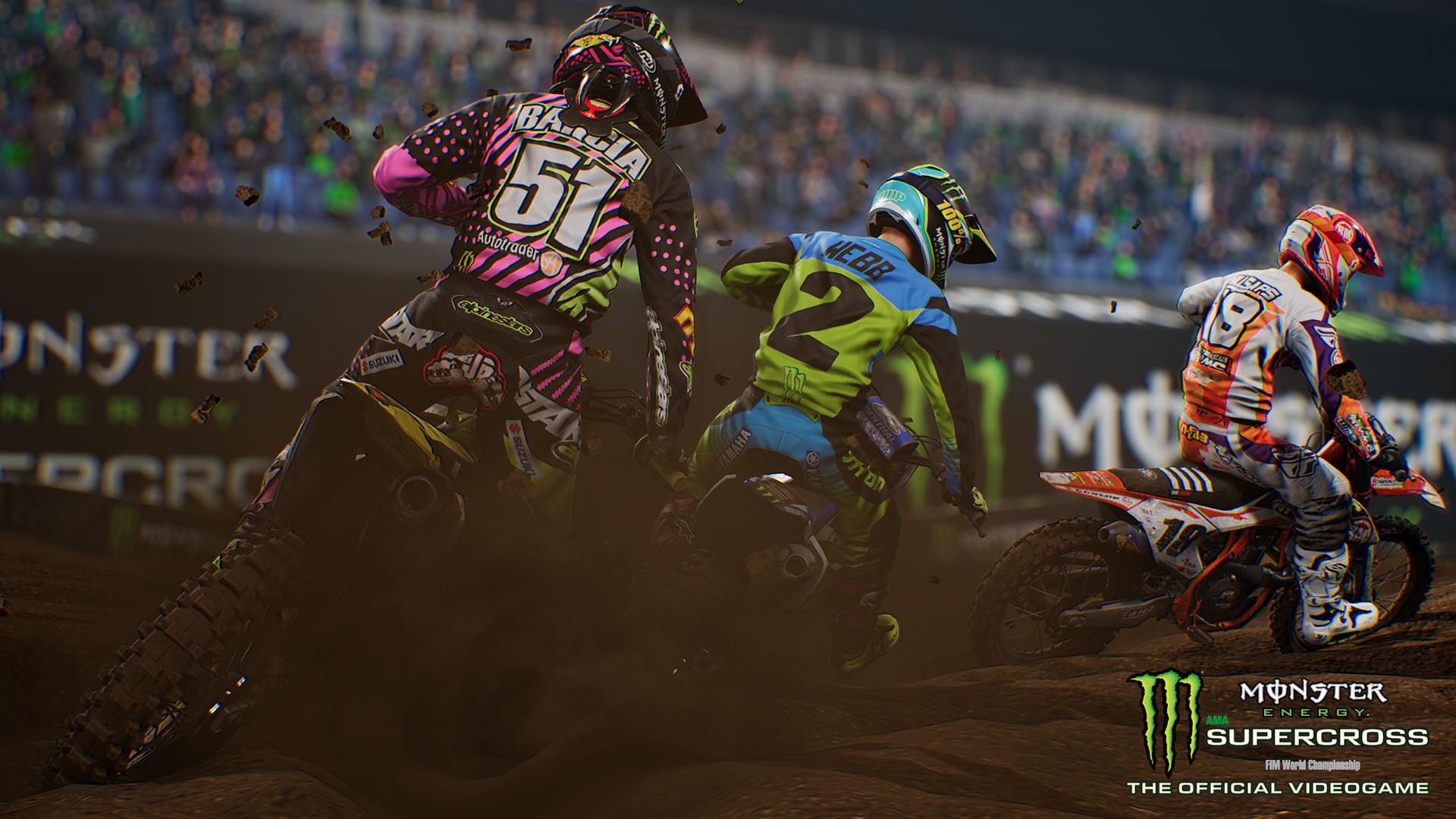 It’s so easy, even someone who writes for Destructoid can use it

Monster Energy Supercross The Official Videogame is a mouthful to say, annoying to have to write out every time, and something that has been stuck in my head since I first got my hands on it last year. I’m not usually the type of person who looks forward to sports games that don’t star a fat plumber and yet I can’t get it out of my mind. My brief hands-on in October reminded me of the extreme sports games my brother and I ate up on the first PlayStation. I don’t know if it’s that rose-tinted view of my past or the fact it’s completely different from the genres I usually stick to, but I’m looking forward to this game more than any other sports title since I found out they were making a sequel to Ken Griffey Jr. Presents Major League Baseball.

So when I was presented with another opportunity to test out Supercross before its launch, I jumped at it.

While the focus of this latest hands-on session was its track editor, a feature incomplete when last I spent time with it, I did get a chance to race on a track previously unavailable to me. Trying out the season mode, I noticed a lot of big and small improvements made to the look and feel of the game. The graphics, beautiful the last I saw them, have been greatly improved. The wetness of the mud during a rainstorm is as true to life as I’ve seen and all of the special effects like fire and fireworks actually look like they belong in this generation of gaming. Handling of my bike is largely the same but with better physics and I found it easier to pull off a whip, a necessary move for anyone who wants to actually compete. I ended up taking tenth place in my return race on an unfamiliar track, which is really not bad and possibly a sign I have some muscle memory of the game lingering in me.

Playing through the available tracks in the game will be a necessary exercise as it is a great way to learn how real Supercross tracks are designed. Education is key because the track editor has a wide array of pieces to play with and it’s best to see how each element works with one another rather than attempting to stick a big jump in the middle of a whoop section that goes immediately into a 180-degree turn. I want to do my best here because there will be a voting system where users can help promote those well-designed tracks to the online community.

Track designing for a dirt bike game was basically perfected 30 years ago with Excitebike. That system was and still is so intuitive that not only could anyone make a track but anyone could make a track people actually wanted to play. Supercross’ track editor is obviously more complex. This isn’t a 2D game so there are spatial issues we have to account for. If Milestone’s ambition here was to create a track editor anyone can use, I don’t see how they could have done it any better. In five minutes I had a working track ready to upload to the server. Was it a good track? Hell no, but the fact I could pick up the controller and put together a playable track with multiple elements that fast shows just how intuitive the user interface is.

While the season mode features real tracks and stadiums from the 2017 Supercross season, the track editor is limited to generic stadiums of different shapes and sizes. I opted for a small, diamond-shaped space because I’m a sucker for a good, dense track. In just a few minutes I laid down what I thought was a compressed speedy masterpiece with wicked turns, big jumps and downright evil whoop sections. Clearly I needed more time to tweak my design because when I went to validate my track, the process that certifies it for online upload, the AI racer that traversed it kept flying off the track. Maybe combining a condensed layout and big jumps isn’t the best idea. 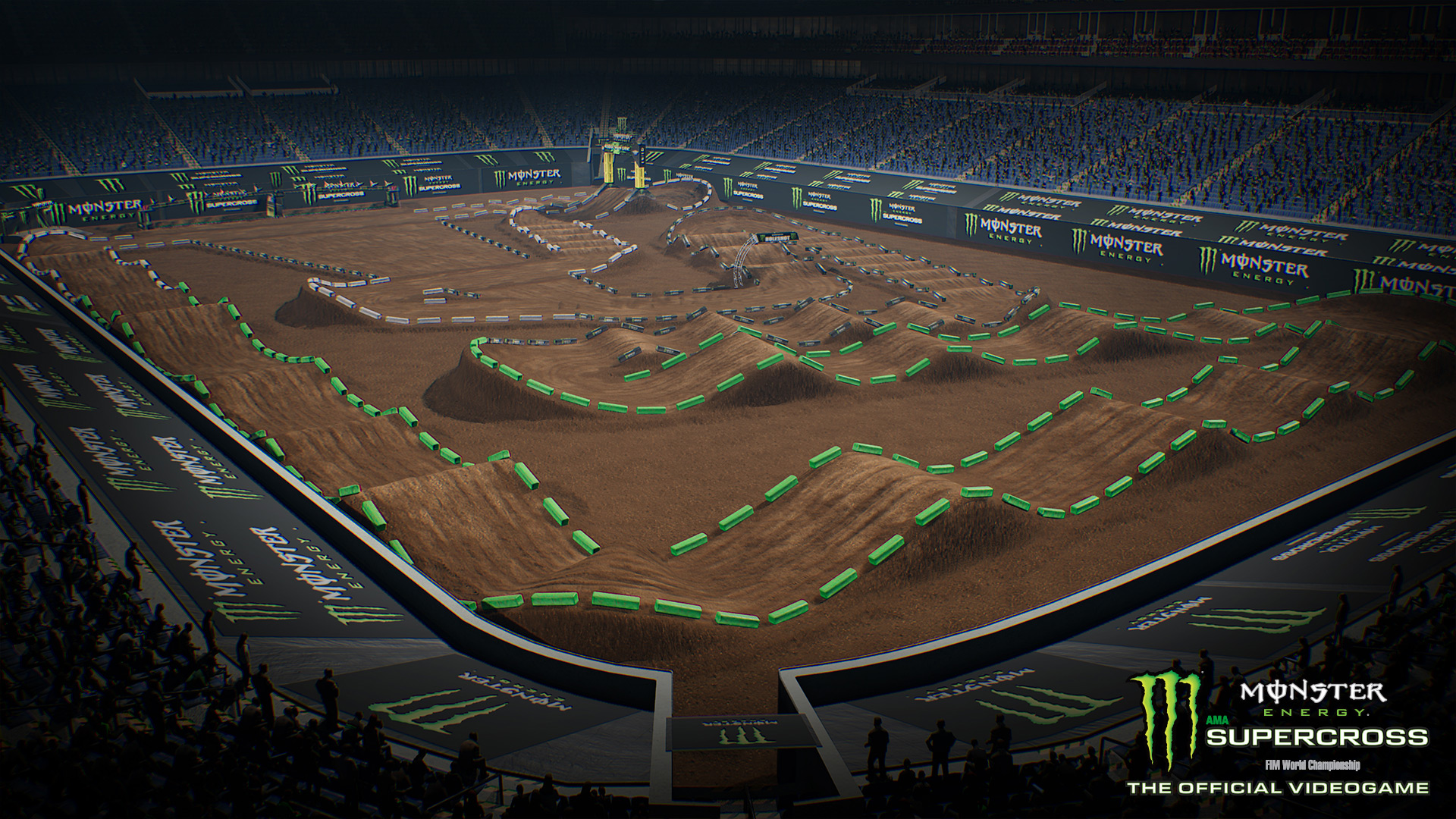 The only hurdle I faced creating my track was my attempt to loop it around. Clearly I wasn’t thinking correctly when I shoved my started point against a wall because that severely limited my lapping options. Visual cues assist with this task as a bright red indicator tells me the loop won’t work while a calming blue light confirms I can successfully create a lap. With a complete loop created, I took it for a spin and found it wasn’t just the AI racer validating my design who had trouble staying on the track. Guess I need more practice.

I generally don’t buy racing games that don’t feature track editors, so to get one here alongside the solid racing of the career mode is a boon. A caveat to that is its limitations on sharing. Created tracks are tied to the platform they’re made on, so no sharing between PS4 and Xbox One owners.

Either way, I should have plenty of time to perfect my track design philosophy when Monster Energy Supercross The Official Videogame launches on February 13 for PlayStation 4, Xbox One, and PC. The Switch version, which last we heard would launch later than its counterparts, will also make that February 13 release date. However, it will not include the track editor.