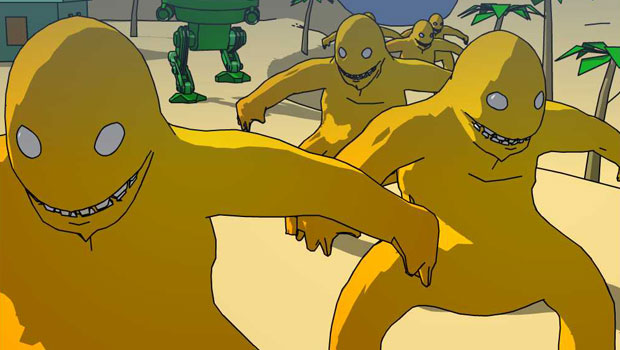 How does an indie developer grab our attention? Well, throw around the names of games like Flower and Pikmin, of course. Developer Onteca is saying its upcoming WiiWare title, Monsteca Corral, will have the “ambient feel of games such as Flower and Pikmin with the excitement of Wii.”

While that stuff doesn’t necessarily compute, it’s certainly a nice sentiment. Monsteca Corral has players controlling a herd of monsters called the Sdompes, who are too stupid to guide themselves through the migration process. Players will use the Wii remote to guide these cute-but-idiotic monsters through the game’s world, known as Monsteca.

Onteca’s managing director, Jon Wetherall, calls Monsteca Coral an “action strategy puzzle” game. He says it’s a “fun gamers’ game,” aimed at a younger market. Well, I like fun, and I have the attention span of a seven-year-old. Sign me up.

Monsteca Corral is set to hit WiiWare next January.