I?m looking for 30 dead guys and one woman

It’s time for part two of our interview series with Gary Winnick and Ron Gilbert, two of the fathers of the Point & Click genre. as we count down to the end of their Thimbleweed Park Kickstarter. Talking to these legendary creators is a privilege that I wish that I had access to every day. I’m tempted to run a Kickstarter for a campaign to force Ron and Gary to keep running Kickstarters year round, so they’d always have motivation to respond to intrusive questions from strangers (aka “interviews”). I wonder how much money that campaign would pull in?

This time around we talked about the differences between Maniac Mansion and Thimbleweed Park, Ron’s tendency to name his games after locations, and how the games that were influenced by Maniac Mansion were in turn an influence on him. Thanks again to Gary and Ron, and come back tomorrow for the final part of this spine-tingling series of questions and answers, because it’s nice to have both.

Dtoid: A lot of Ron’s games are named after places — a mansion, an island, and now a whole town. Sometimes these places are quite literally characters in and of themselves,like the cave in The Cave. This differs a lot from the cartoon mascot (Super Mario) or dramatic phrase/action title (Just Cause, Grand Theft Auto) convention that’s common with big name games. Why do you want to make games about places?

Ron: To me, the main character in an adventure game is the world. I always start there and build up. It’s where the player spends all their time, exploring and interacting with it. If you build an interesting world then it’s easy to populate with characters and story. Maniac Mansion started because Gary and I were poking fun at the main house at Skywalker Ranch. Monkey Island was because I wanted to live in the Pirates of the Caribbean ride.

Gary: We just like weird and eclectic storylines and characters—and being able to create a place/world setting, giving it an identity that fits it into a particular universe, helps us ground an adventure and give it depth. As you mentioned, it’s like the house or the town is a character itself.

Dtoid: While the character proportions and general look of Thimbleweed Park shares a lot in common with Maniac Mansion, there’s some added texture to the characters that give them a “homemade paper” feel. What inspired this use of “strategic visual noise”, and do you plan to use it the in final version of the game?

Gary: I think we really wanted to evoke the nostalgia of Maniac, but also wanted to try adding a little extra nuance. Just wanting to see if it might come across as a bit more interesting. As far as using it in the final game, I think we’ll fool around with this and a couple of other approaches since we’ll have some time to experiment.

Ron: Yeah, it as just an idea we were exploring. Once things really get into the engine we’ll play around with the look. We want it to be very “authentic”, but also slightly modern. We often talk about it being like you remember Maniac Mansion, not how it actually was. 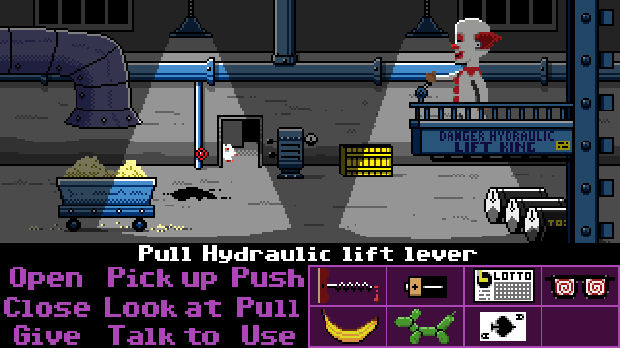 Dtoid: You’ve created a lot of games since Maniac Mansion. What do you know about game development now that you didn’t know then, and how do you plan to use that wisdom to make a better game?

Ron: We’ve learned a lot about adventure game design since then. Maniac Mansion was our first game, so we were basically fumbling around hoping not to get fired. After Maniac Mansion, I wrote an article called “Why Adventure Games Suck” that outlined a set of rules I had for designing an adventure game and followed that very closely during Monkey Island. I think all the rules still apply. We also know a lot more about managing a project now. Controlling scope and the art of cutting. What you cut is often more important than what you leave.

Dtoid: Just about every narrative and/or comedy game of the past 20 years has been influenced by your work. The Telltale games, Stanley Parable, and Kentucky Route Zero are just a few examples. Have any of those games influenced you in return, and if so, in what ways?

Ron: I love the mood of Kentucky Route Zero. There is a feel and ambiance to it that is just perfect. I love studying that game, trying to see everything they did to achieve that. Music, art, lighting, it all comes together perfectly in that game.