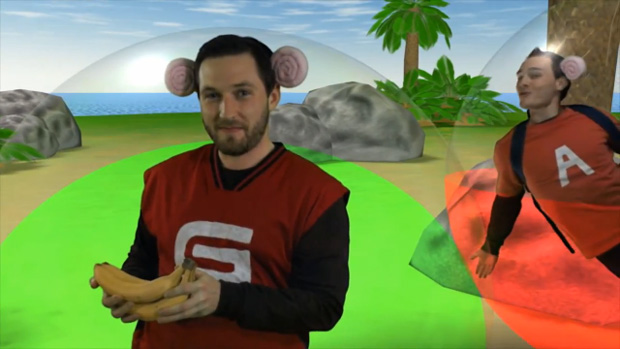 Internet musical collective Random Encounters has been whipping up promotional videos for Sega lately. They concocted Sega Bass Fishing of the Dead as an April Fools’ joke, then they followed up with a musical based on Rhythm Thief & the Emperor’s Treasure for the 3DS.

Next on the list is Super Monkey Ball: Banana Splitz, scheduled to release on PS Vita on October 23. This new production will be broken into three parts, with the second act set to go live next Friday. The RE crew dresses up like AiAi and the gang, slapping monkey ears on their heads and turning themselves into mutants with two sets of ears.

This series is now about deformed human-monkey crossbreeds trapped in airless plastic balls. Animal cruelty at its finest.