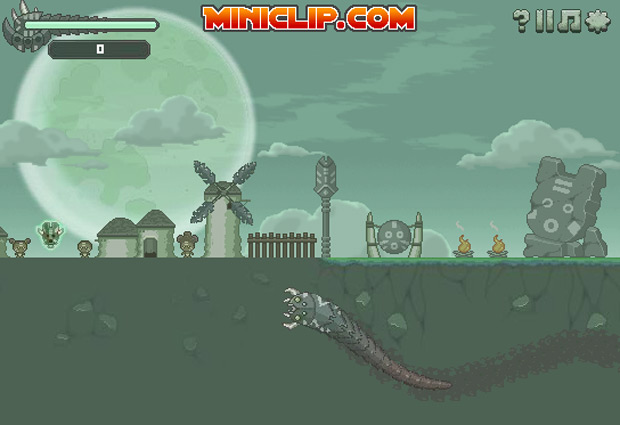 Reasons why you should play this game:

Seriously, did I have to keep typing after “you play as a Tremor“? Because of the clever level design, you’re not restricted to just playing in the ground and surfacing for short periods of time. Much like a South African great white shark, you can dive deep, aim for the surface and gain enough momentum to shoot yourself across the sky, over hills, or into different floating island landmasses in the sky.

In that sense, it’s a bit like someone hacked Knytt to allow a Tremors mod to wreak havoc on the world. Oh yeah, and can you also swim in the ocean like Echo the Dolphin? Yeah sure, why not? This game is about limited restrictions and maximum fun, which is always a great goal.

Major applause to the creators of this extremely fun and fulfilling game. Each level is distinct in both its design and gameplay goals, and I could play any single level for hours and not get bored. Pro tip: even though the main objective is to kill every last human, decimating their structures gain you much more bonus points, and if you reach a certain amount of damage points you can press the space bar to continue to the next level. I found that to be far easier and far more satisfying for each level.

You should play Worm Food here on Nitrome because this game deserves to be played.