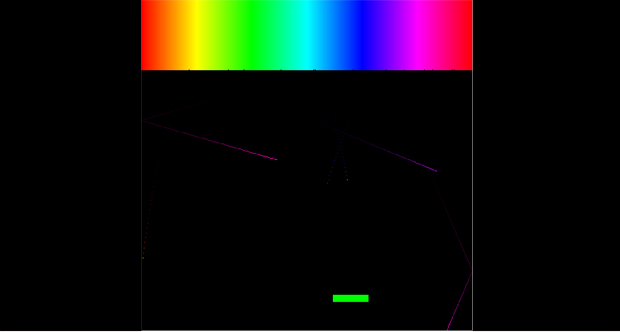 Recently on Reddit, I discovered quite the artistically pleasing recreation of the old Breakout game. Those of you who are flash code fanatics can dig through all of its lines of code here, but since its code credits are in Japanese, I didn’t know what else to call it other than Breakout Rainbow Pixel Sex. Thankfully, Brad Rice came to the rescue and translated the information to reveal that Particle Destroyer comes from Kayak Inc.

Be warned, the first half minute is actually quite boring, but this is just to contrast the eye candy that awaits. Instead of a gradual rise in entertainment, the creators decided to bypass pacing issues and just throw maximum stimulation at the player after they’ve knocked about 20 or so pixels out of the sky. I won’t ruin the visual surprise; you’ll know when it happens.

However, it’s worth pointing out that if you suck and can only hit one pixel at a time, you might want to just hit F5 and start over, since it could take a full minute to get to the excitement, which is clearly too long to wait! If it takes more than four minutes to beat the whole game, then you’re doing something wrong.

You can play Particle Destroyer here on Wonderfl. Once you’ve completed it, there’s an unofficial sequel that’s even more intense, that was created by a happy Reddit reader. You can play it here.