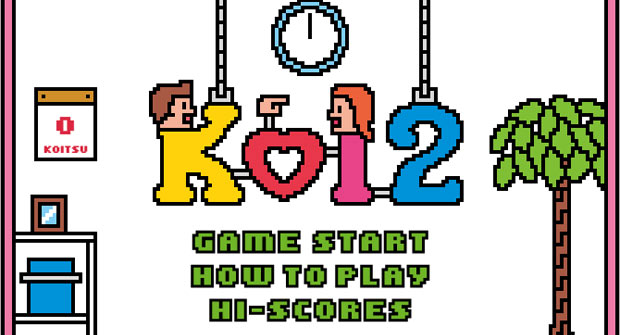 Last week was full of violence as Karoshi (Japanese for “death by overwork”) brought us countless levels involving suicide strategies. If you thought that was the peak of Japanese odd vocabulary and Japanese-themed games, well, then you haven’t played many Japanese games before. Bizarre games like this get passed around behind the scenes at Dtoid pretty often, but after seeing this one today I just had to share.

This week we have a fantastically silly game called KOI2, which seemingly encourages mindless acts of repeated spousal abuse. The goal is as simple as poking a girl in the forehead as many times as possible in a certain amount of time. While this mouse button mashing game might not seem like your typical weekly mind teaser, it’s at least educational. Apparently the game’s name comes from the Japanese word koitsu, which usually means “this guy” when you use it. However, it can also be said to a stranger as a “how rude!” expression of anger.

And my favorite part of this exchange of words is the intended reply when a stranger calls you a koitsu. If anyone ever points at you and yells “koitsu!”, then it’s customary to turn around, point right back at them, and shout “soitsu!”, which means “this guy” in Japanese. “That guy!” “No! This guy!” From now on when I’m in public I will randomly yell “koitsu” at people until one day someone finally responds with the proper reply. That day may very well not come until the next time I see Brad Rice in person. So be it.

If you’re afraid to play this game that feels like a Freudian Katamari Damacy dream (and you should be), then feel free to first watch the video of it below the fold. It features just a few of the many random powerup ways to poke her in the forehead. Hammers, rabbits, summoning genies, etc. You know, the usual.

You can play Party-Tencho‘s game here, or try their other equally crazy games here. [Thanks for finding this game, Travis!]