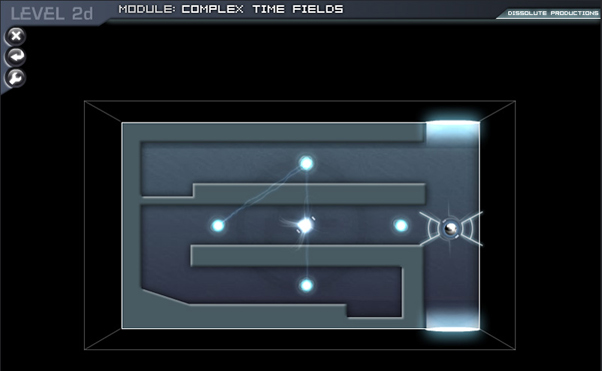 Did you survive the last mind teaser with your brain intact? Good! Because it’s time to put your head to good use again with this temporal puzzle game.

If you even remotely enjoyed Portal, then this is a flash game you definitely need to try. The slick metallic and plasma graphics are spot on, and the electrical gameplay is every bit as fulfilling as you’d hope by looking at the picture above. Toss in some really pleasing sound effects and you’ve got something that’s hard to stop playing.

I was going to be completely okay if it was just a Portal clone, but it actually adds in an alternate dimension time reversing gameplay mechanic that fits in so well that you start to actually wonder if it will be a part of Portal 2. Then comes the gravity altering feature and I was convinced this game is worth sharing after playing only a few levels, which is rare for me to do with these mind teasers.

Right now I’m enjoying the wormhole gameplay action and wondering what it will throw at me next. The only complaint I can think of so far is that I hope it’s much more challenging later on. You can play EON‘s game Epsilon here on Newgrounds, via Dissolute Productions.

Update: I just beat it and I have to say that’s the coolest ending to any flash game I can remember playing. Awesome Portal-worthy ending, followed by some visuals I didn’t know flash was capable of, followed by a kickass looping techno music beat. You all need to play this game. I’m definitely going to pilfer through all of his music now.