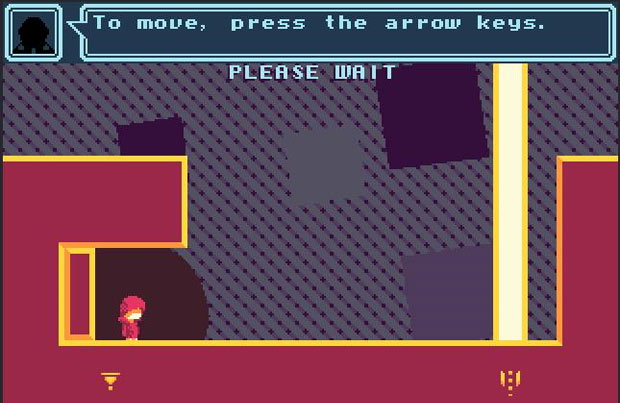 From mirosurabu — the man who brought us the much loved Tower of Heaven port — comes another intriguing flash game port of a free, downloadable PC game. It’s pretty impressive that Kyle Pulver made this entire game in just 48 hours! To call it a Mario meets Portal game wouldn’t do it justice, but it wouldn’t be too far from the truth. However, the truth isn’t something this game prides itself on.

From the very start of the game, Depict1 informs you that it’s lying. You’re hesitant about trusting or distrusting the narration, but after it gives you the wrong keyboard gameplay instructions, you don’t doubt its deceit anymore. Its tips on how to defeat enemies don’t reveal their weakness, but instead the player’s weakness of trust. Whereas most games boringly tell you to collect some random, shiny object, this game instead uses it as yet another test of the player. It’s as if GLaDOS just came right out in the beginning of Portal and admitted her true intentions, which offers some interesting gameplay and level design tricks.

I’m not far into this game at all yet, but I’m already hooked. It’s a constant anticipation of what will be lied about next, which is a mood that needs to be explored more in the gaming industry without always resorting to false narrative twists in third acts. Any game that taunts you by giving you achievements for stupidly trusting the game’s actual instructions is a game worth playing!

You can play Depict1 here on Newgrounds. Thanks, Steve Swink!