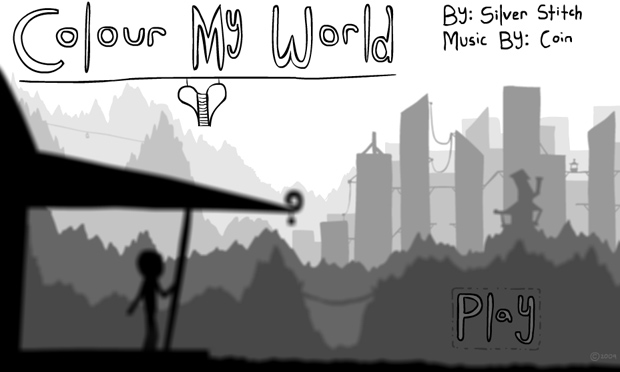 This week’s mind teaser uses even less color than last week’s fun hacking simulator game. Colour My World was rated as one of the top five Newgrounds games of October, and when you beat it in just five minutes, but still feel satisfied, you’ll know why. If you’re a fan or fanatic follower of Passage, then you’ll definitely want to give this game the ten minutes it deserves.

What it lacks in graphics it makes up for in bleak grayscale immersion. What it lacks in gameplay it makes up for in background animations and depressing scrollover signs you can read on each screen. Set in a world where color and emotions are forbidden, it challenges you to find the courage to . . . go on a date. Saves the laughs for after you’ve completed the game, it’s got some charm to it that will stick with you for a few days.

This game explores an idea that’s far from unique, but still greatly unexplored. Colour My World isn’t the several hour Xbox Live Arcade or PSN game you’ll wish it was, but it’s a deeply appreciated taste of something great. It definitely has me wanting more, and I’d love to see a game company turn this kind of a colorless concept into a full game. Maybe Amanita Design‘s next game after Machinarium? Wink, wink. Nudge, nudge.

You can play Colour My World here on Newgrounds.