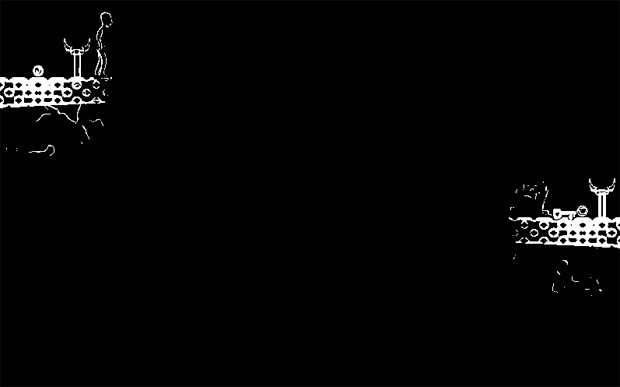 This week’s puzzle game will either fascinate or terrify you. Maybe both. Oh, and unlike recent mind teasers, it’s so impressive that it’s being remade for a PC release, which is up for three IGF award nominations and will be in the PAX 10 Showcase! You can find out if it wins any of those awards Thursday, live on the Web. And if you’re wondering why this grim game looks oddly familiar, it’s because Grim teased you with a trailer video not long ago. If you want another preview of the PC game after playing this flash predecessor, then you can see more imaginative level design in this video.

It’s a little hard to describe the game, but a good comparison would be if Jhonen Vasquez was inspired by The Legend of Zelda: Ocarina of Time to make an artsy game based on the water temple and the shadow temple. If you recall those two temples to be the most tortuous of the entire game, then you’d be right. Now imagine playing the water temple in darkness. It’s not that it’s overly hard, it’s just that it uses a gameplay mechanic that’s starkly different from the usual flash games you’re used to playing.

Each level is just a single sidescroller screen, but the thing that makes this game so intriguing is that every pixel of the level exists only if you can see it. Let me repeat that so it really sinks in. The level only exists if you can see it.

Every level has a few dim and bright orbs that can be picked up and carried, or be placed on stationery or moving altars. Some doors can only be entered with keys, while others require extra light be shone on them. It’s nowhere near as simple as walking around with a flashlight, and many puzzles revolve around destroying parts of the level with darkness while simultaneously resurrecting other parts of the level back into existence by shining light on them. Imagine being blocked by a wall, so you move the light so that you can’t see the wall and the floor disappears — jump over the gap and through the wall that no longer exists and you’re in the clear . . . as long as the floor exists on the other side to prevent you from falling off the screen.

Add immense and overwhelming darkness combined with eerie music and you have a game that’s creepy enough to make you hide under your covers. Despite the similarities, it’s no water temple in difficulty, but there will probably be at least one level that stumps you for a while. Thankfully it saves your progress after each level is completed, so feel free to take a break and come back later to continue where you left off.

You can play Tyler Glaiel‘s free flash game Closure here on Newgrounds. Art and animation by Jon Schubbe and music by Chris Rhyne.