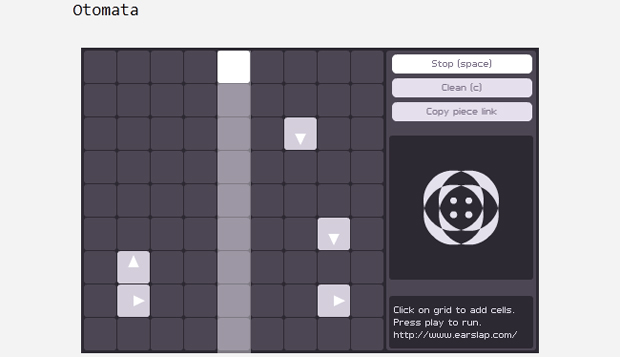 Since you guys liked Sembeo sound matrix so much, here’s another spatial sound synthesizer program that lets you create music. This one feels slightly more like a game in that each note has an intended direction to it, so by planning out where collisions will occur you can control more complex sounds, although after a few collisions it’s mostly a case of sitting back and enjoying your song as it takes on a life of its own.

Here’s one of the simple tracks I came up with. By random luck the note in the second column from the left never seems to leave its column, thus acting as the foundation for the backbone tempo while the other notes subtly change directional patterns every few seconds, serving as a playlist that seemingly has yet to repeat after five minutes of play time so far.

You can play EarSlap’s Otomata here. Share your clever creations in the comments or send me Monday Mind Teaser game suggestions on Twitter!