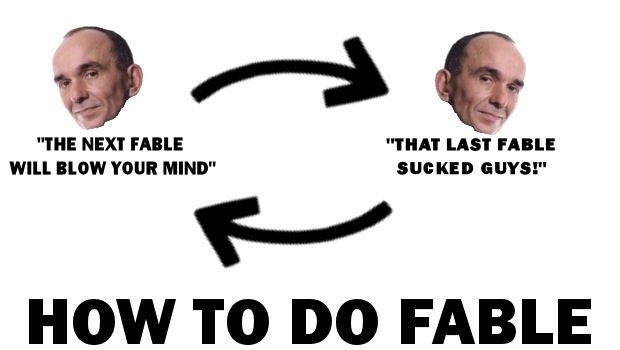 When I saw this morning that Peter Molyneux had slated Fable 3 in order to hype the next one, I almost vomited a rainbow. The fact that he can keep doing this and not get called on his bullshit is astounding. Yep, the Molyneux hype train is ready for another ride!

“I think we took Fable 3 and realised it wasn’t quite up-to-date with [the best modern games] and that we need to go forward,” he told CVG. “But the great thing about Fable is there’s nothing quite like it out there. There’s nothing wrong with FPS games, but they are what they are — their currency is what they blow up. Our currency is this beautiful charming dramatic world that has different things in it every day.

“I have a very clear idea where Fable will go in the future. Trying to be diplomatic, I think that whatever we do next with Fable, we should just amaze people with the quality. If we go on, we’re not just going to make another Fable, we’re going to make something that stands head and shoulders up with anybody else out there – the best of the best — in terms of its technology, its drama and its storytelling.”

Sound great, except Molyneux said the same thing twice before. First, he slagged off Fable when promoting Fable 2, then he said Fable 2 wasn’t all that hot but Fable 3 would be the best. Now, like f*cking clockwork, he’s at it again.

You can’t play this game forever, Molyneux. Soon more than just smart people will see through it.