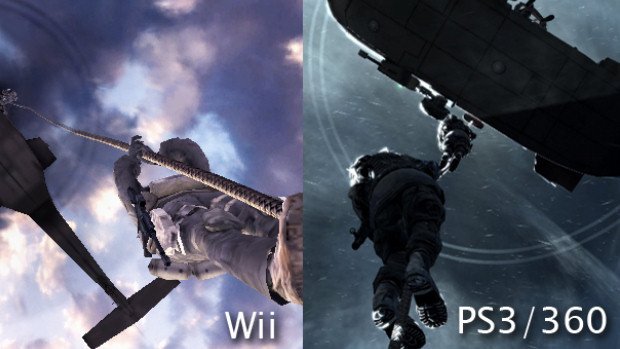 Really, Game Informer? Really? Is this what we’re doing, now? We’re comparing Wii games to PS3 and Xbox 360 ones? Apparently we are!

Yes, Game Informer has seriously run comparison shots between Modern Warfare: Reflex on the Wii and Call of Duty 4: Modern Warfare on the Xbox 360 and PS3 in order to prove … nothing. Aside from being two totally different games on systems that have no justifiable comparison, I really don’t know what anybody would get out of contrasting a Wii game and a HD console game.

Surely we all know that the Wii is not capable of the same graphics as other machines. Are there really people out there that need to see a visual demonstration before they’ll understand it? I can’t even imagine fanboys getting upset by this stunt, considering how hilariously pointless it is.

Anyway, just thought you’d like to know that something like this has happened on the Internet today. Somebody visually compared a 2009 Wii game to a 2007 Xbox 360/PS3 game, and it was the most ridiculous thing in the world.

So … which game do you think looks better?