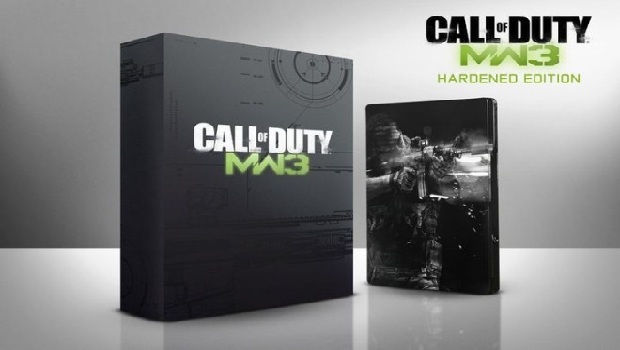 A listing for Call of Duty: Modern Warfare 3‘s Hardened Edition showed up on GameStop for the respectable price of $99.99. The contents of the package were leaked a few days ago right before the Call of Duty XP event. At said event, it was announced that Call of Duty Elite Premium would set you back $49.99. All things considered, the Hardened Edition is looking like a very enticing deal. For $99.99 you will get a one year membership to Elite, Founder status in Elite, a SteelBook case, a Juggernaut avatar outfit for 360 owners or a timeline theme for PS3 owners and a limited edition field journal all on top of the game itself.

If a majority of that content is worthless to you, you’re still basically getting Elite for $10 off, which gets you all the map packs within that year and other exclusive content at no additional charge. And if you’re going to be spending money on all the future map packs anyway, you have no reason not to save yourself a bit of cash and drop $99 on the Hardened Edition this November.