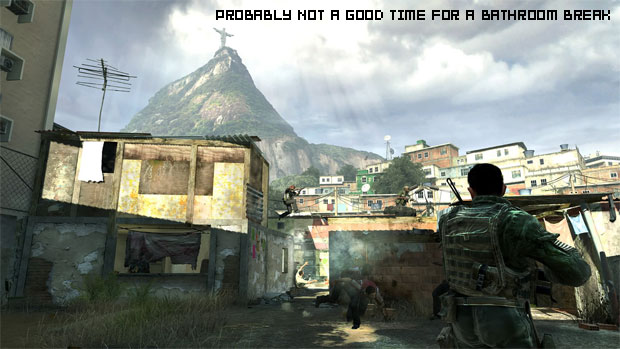 As you might recall, Infinity Ward decided to cut cooperative play from Modern Warfare 2‘s story mode and opted to create the Spec Ops mode to satisfy the need for friendly shoot-the-bad-dudes action.

IW’s Robert Bowling has once again gone on the record to defend the decision. Campaign co-op “ruined the experience,” he explained to VG247. Bowling says “it really broke the cinematic experience, took the immersion out of it, out of the story and the pacing and everything we’d spent so long crafting.”

“It just ruined the experience we were aiming for, so we took it out, kept the single-player for that one player intact and polished it.” Generally speaking I would say making co-op optional — so long as it scales correctly difficulty-wise — wouldn’t hurt anyone.

But in the case of Infinity Ward, I can see where they are coming from. For instance, what if the incredible nuclear explosion aftermath sequence from Modern Warfare had been co-op enabled? How exactly would that work?