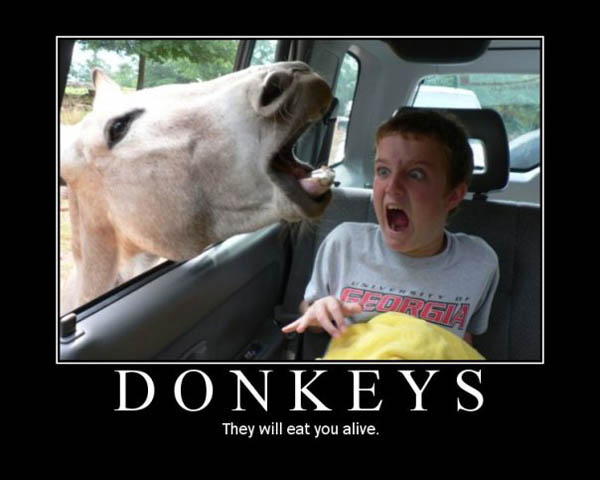 SPOILERS, first of all.

Secondly: what you see above may be a leaked gameplay video from Modern Warfare 2. We’re currently awaiting comment from both Infinity Ward’s PR guys and the community manager, Robert Bowling. Before one gets one’s panties in a twist about the subject matter, do keep in mind that this could be fake.

Update:  The video has been confirmed.  Get the details about this level as explained by Infiniti Ward.

Update 2:  Activision has asked us to remove the video, so we’ve replaced it with a photo of a donkey.

You’re evidently looking at footage of a Modern Warfare 2 level in which the player is put in the shoes of a terrorist. A terrorist who, evidently, is part of a group of other terrorists who have stormed an airport and begun shooting civilians haphazardly.

This would not be particularly noteworthy were it not for the fact that, judging from the video, the player has absolutely no one to shoot at except for civilians for at least the first four to five minutes of the level. This scene was hinted at in the game’s early trailers, but never in this context.

One can only imagine the media sh*tstorm that is soon to follow.

Filed under... #Call of Duty#Top Stories