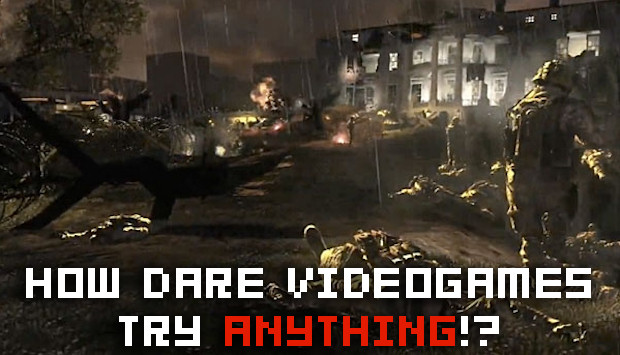 The latest trailer for Modern Warfare 2, depicting a Washington under siege, was only revealed this Sunday, but it’s already raised the ire of crybabies/pot stirrers who can’t handle the concept of a videogame trying something contemporary and unique with its plot.

The Christian Science Monitor does the predictable and easy thing — invokes 9/11 like it was Godwin’s Law and insinuating that no videogame should dare even think of touching that sacred and Holy event. The article stops short of accusing Infinity Ward of “trivializing” 9/11, but it does manage to throw in the obligatory Grand Theft Auto reference. It also displays ignorance of the subject by completely skipping the Fallout 3 post-nuke Washington imagery.

“And with what’s coming out of the gaming industry these days (Grand Theft Auto IV, anyone?) is this any worse? Maybe not,” explains the writer. “But this is one of the first times such striking imagery has surfaced since 9/11, when the idea of widespread destruction on US soil was suddenly thrust into reality.”

Interestingly, the author of the post claims that, “Some say the images of destruction on US soil are too much for a post-9/11 audience,” yet it provides no evidence of these mysterious criticisms and instead seems to indicate that somebody’s trying to invent a controversy. The article also implies that showing devastation in a videogame is perfectly fine, provided it’s not American devastation.

I am mainly posting about this because I doubt this is the last we’ll hear of this issue, and I fully expect the usual unimaginative outlets to jump on this “shocking 9/11 imagery” as soon as they hear about it. I could go on a rant about how, almost ten years on, people need to grow a set and stop being hypersensitive little bitches and screaming “9/11” at everything, but I’ll save that until this inevitable canned controversy kicks into overdrive.