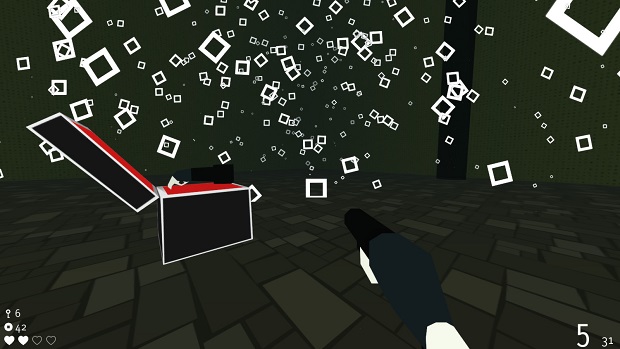 Fancy Skulls is a challenging and visually striking first-person shooter that features random level generation, permadeath, and a distinct art style straddling the line between looking like Foster’s Home for Imaginary Friends and exhibits you might find installed at the Museum of Modern Art.

The game’s creator, independent designer Tequibo, describes the protagonist as “an immortal creature” whose goal is to “escape capture from a collection where [it] is the main treasure.” It’s a straightforward premise, much like we find in similar titles such as Terri Vellmann’s fantastic roguelike shooter Heavy Bullets.

Fancy Skulls differentiates itself not only with its unique visual style but with its weapons. Each weapon type functions differently than the others, and every weapon can be modified with options that provide interesting new gameplay variables. Examples of mods include backpedaling to generate ammunition, scoring twelve hits without missing to earn money, last two bullets in a magazine do double damage, and firing while airborne costs no ammo.

Fancy Skulls is a hell of a lot fun and definitely scratches that itch if you’re looking for short bursts of challenging first-person gunplay. If you’re interested in learning more about this Early Access title, you can do so on the game’s store page on Steam or on the title’s official website.