I had regrets about starting this weekly feature early last week when I started looking for my next few games to talk about. Because, boy, there is a lot of crap out there. And while I’m sure the developers are nice people, I don’t think you’re going to get me to play a game called Super Jon’s World: Adventure Castle Run Boy Jump.

Thankfully, the three games below provided me with more than enough amusement this week and I’m happy to share them with you.

I’d never heard of developer FaceIT before starting up Summer Catchers. Looking it up, it just seems to be a tech company creating web programs and apps. Only two games appear on its website, this one and something called UFO Crushers that I can’t find any information about. If Summer Catchers is any indication, the team might have a bright future in mobile game development.

Set in a serene, snowy world, Summer Catchers stars as Chu, a young girl with a simple dream. She wants to see what summer is and, with her own set of wheels, she’ll be able to make that dream a reality…just as long as she collects berries, plants trees, and outruns weird monsters. The game is an auto-runner though it plays a bit different than most in the genre. As Chu drives down each randomly generated course, she’ll encounter different obstacles looking to break her down. She has a short list of tools, such as jump or shield, she can use to get past these. However, each tool presents itself in random order.

Before each run, you’ll use the mushrooms you collect to buy these tools. When you hit the road, you’ll get access to three of them at a time on the right side of the screen. You could get one of each, three or the same, or any combination of the available tools you’ve purchased. When you approach an obstacle, use the correct tool to get past it. If you’re too slow, use the wrong one, or simply screw up, Chu’s vehicle will take damage. Three hits and she’s out, though certain obstacles are one-and-done.

It took me a few runs to get into the groove of things and while you can randomly swap one tool, it’s better to just get used to the idea that you’re going to crash a lot. That’s okay. It’s part of an experience that is often mesmerizing. Summer Catchers‘ art direction is stunning on my Retina screen and the soundtrack from Geek Pilot Soundworks is pure gold. So even when I’m failing, I’m enjoying every bit of it. 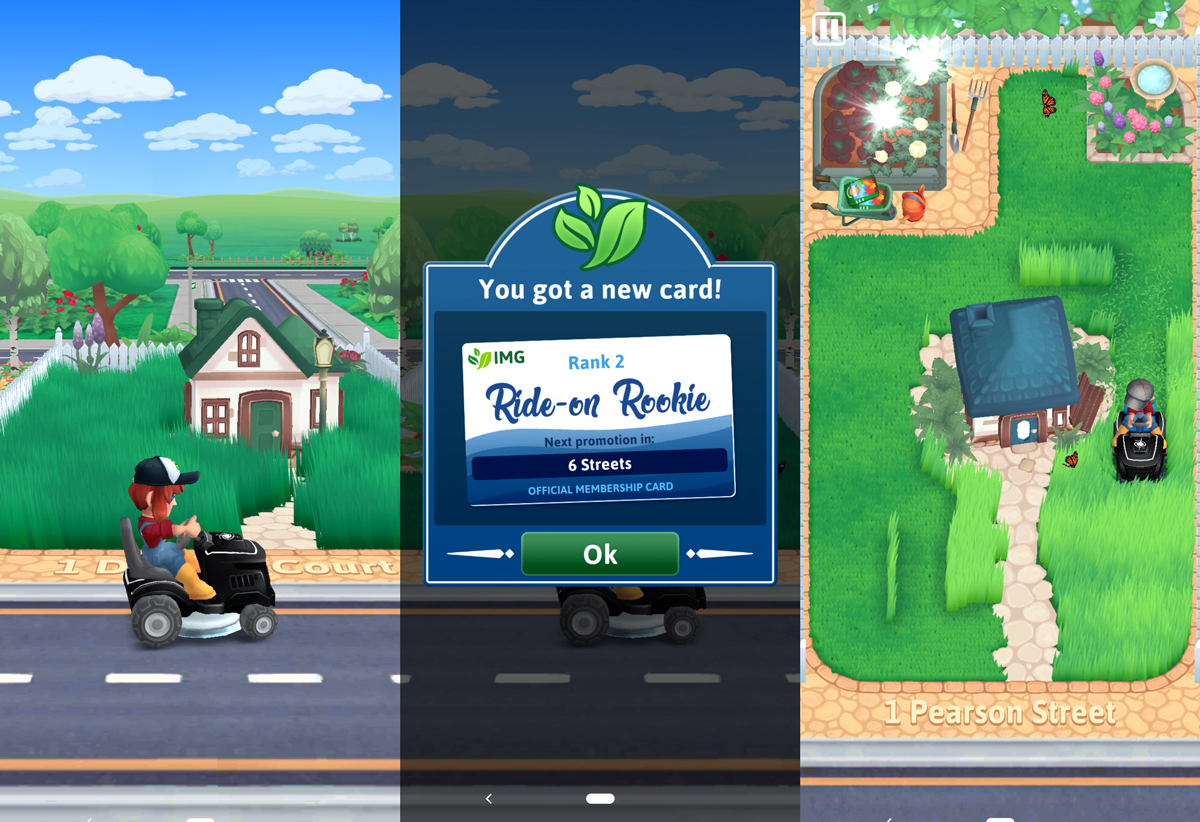 Call me crazy, but one of my favorite activities growing up was mowing the lawn. Sure, it was a chore, but it was a chore that got me outside and there’s nothing better than the smell of a freshly cut lawn. Plus, I got to mow over sprinkler heads and watch that shit fly.

It’s Literally Just Mowing is that and nothing more. There’s no score, no timer, just lawns that need cutting. The grass swaying in the breeze looks spectacular considering it’s a free-to-play game and going through each lawn, park, or field is cathartic. You can upgrade your mower with new parts that are just for show as well as hats to keep the summer sun out of your face. Most of these are picked up in loot boxes, and while you can spend money on gems, though if you’re going to spend any money at all, it’s probably best to pay $5.49 to remove the ads. Frankly, they’re a bit too frequent for my liking. 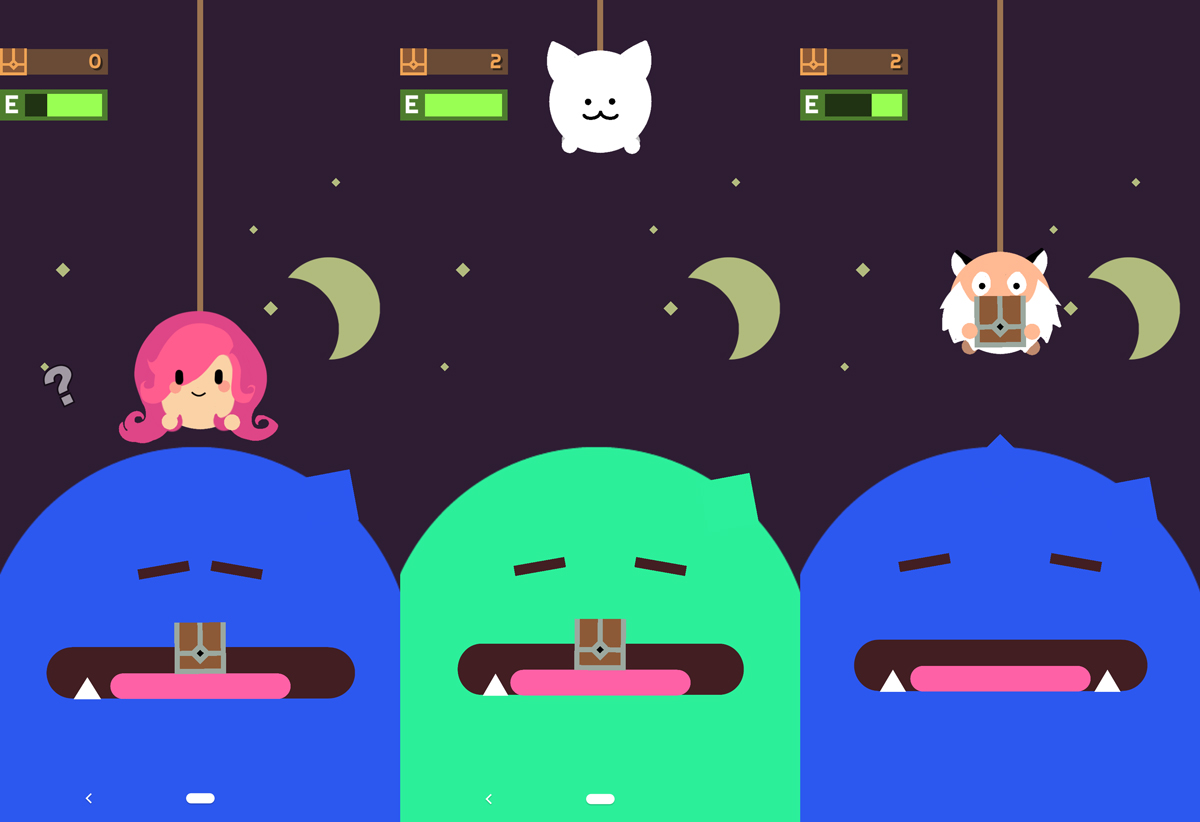 While I’m not going to get into the debate of “Is this really a game?” there are certain mobile titles that I think are better described as “time-wasters.” These are the games you play on the train or on the bus or in a waiting room as you try to pass the time. There’s nothing wrong with being a time-waster. In fact, some of my favorite mobile games are ones I never intend on putting more than five minutes into at a time.

Orc Heist is one such game. From Stuart Nisbet, this appealing little app is a micro-stealth game where the object is the grab the treasure out of a monster’s mouth without getting caught. The game is a test of reflexes. As you hold the screen to lower your cat or other critter in the mouth of the monster, question marks will appear as the monster gets closer to waking up. Lift your finger off the screen to stop moving. If you’re still moving at the end of the warning, it’s game over. These warnings start out slow but as you progress from monster to monster, they become faster and more frequent.

It’s an extremely simple premise with extremely simple artwork and music to match, but it’s all just so enjoyable. Each chest you successfully retrieve contains coins or orbs which can be spent on loot boxes. In a pleasant change from other loot box games, limited-time items feature unique pulls so you never get the same item twice.

Orc Heist is a free-to-play game with in-app purchases. For 99 cents, you can pay to remove ads.