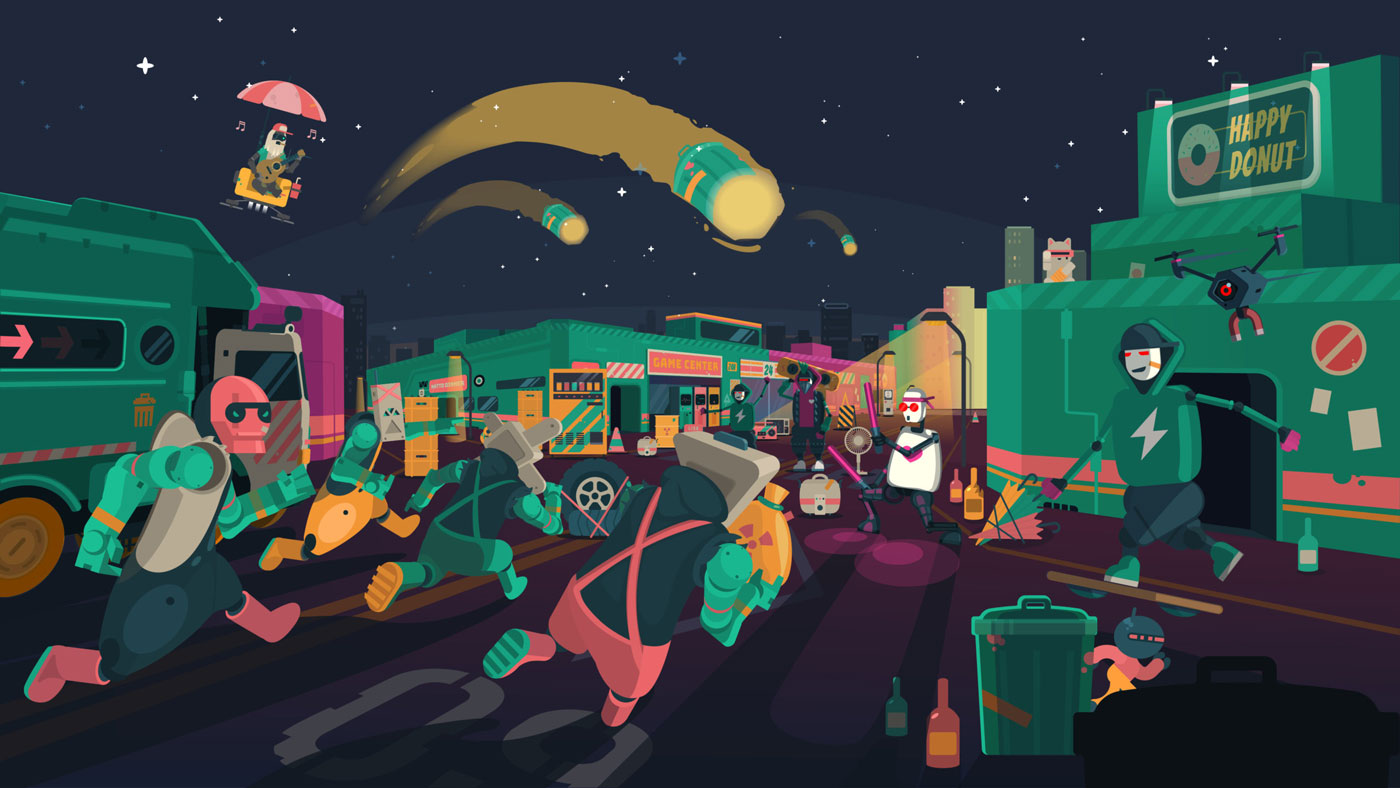 What a hunk of junk

Like most of America, I’m doing a lot of work from home right now. It’s all we can do to keep this country going. When I did actually go into the office, I’d spend my breaks playing whatever mobile games I had downloaded that week. Now that I’m working from the same desk I record Podtoid at, I have more options and, quite frankly, more time. And while I haven’t given in to the temptation of playing Switch when I should be working, I have broken out my iPad and Xbox One controller a few times to get some Apple Arcade action.

I’m going to try and refrain from doing that this week, but if there are any new titles like Scrappers, it’ll be hard to resist.

Featuring a slick visual style and catchy tunes, Scrappers is a trash-collecting beat-’em-up set in the not too distant future where mankind’s been wiped out by our hubris and trash. The only things left on Earth are robots and our trash is their treasure. You play as a member of the Scrappers, collecting as much trash on each stage while fighting other robots and sticking it to big robots in charge of it all. It’s like if Wall-E were a badass instead of a doe-eyed little robot who always makes me cry harder than the ending of Jurassic World 2 when I realize it’s setting up another sequel.

Set across four areas of Junktown, Scrappers is divided up into a series of short stages that are littered with trash and enemy bots. As you travel through each stage, you’ll do so with an insatiable garbage truck. Toss junk in the back to earn money. You can deposit the trash you find or the other robots you defeat. The more you put in, the higher your score will be at the end. All the cash you collect from the stages can be used to unlock new weapons, robots, and parts for your trash truck.

The combat in Scrappers is a pretty barebones beat-’em-up. You have a simple combo and enemy robots always seem to find ways to sneak in a jab as you smack them around. If you do die, it costs you money to revive and that cost goes up each time you kick the bucket. The key to success is being able to read the enemy’s attack and overclocking your system if you find yourself surrounded. Scrappers can be played solo and in local or online co-op, though as I’m in lockdown, I wasn’t able to test out the local co-op. I also wasn’t able to test the online co-op because I don’t know if Apple Arcade owners are aware this game actually released. I certainly couldn’t find a press release for it in the Destructoid email.

But if you have Apple Arcade, give it a go and take a look at some of the games that have hit the service over the past few weeks. Titles like Spyder, Roundguard, Crossy Road Castle, and this are convincing me that keeping this subscription around is worth the $5.

Scrappers is available on iOS as part of the Apple Arcade service.

Tiny Islands owes a lot of its appeal to Ustwo and its Monument Valley franchise. That series opened the doors for poetic puzzle games on mobile, and while Tiny Islands may lack its thought-provoking storytelling, it does feature fantastic art direction and relaxing music. The objective of the puzzler is to locate three golden blocks on each stage. The stages are broken up into a series of floating islands that can be rotated a full 360 degrees with a variation of the top island’s makeup existing on the underside.

Zoom in for closer inspection and you’ll find the blocks hiding under other objects, crammed into tight spaces, or sitting in plain sight so long as you rotate the stage just right. Early levels feature blocks that are easy to spot, but as you advance the seasons, expect to spin and flip these islands several times until you find exactly what you’re looking for. There are also sparkling, hidden objects in each stage you’ll need to locate to unlock the final bonus area. The concept, the art, and the music add up to what is absolutely a pleasant experience.

Tiny Islands is available now on Android for $1.99 without ads or microtransactions.