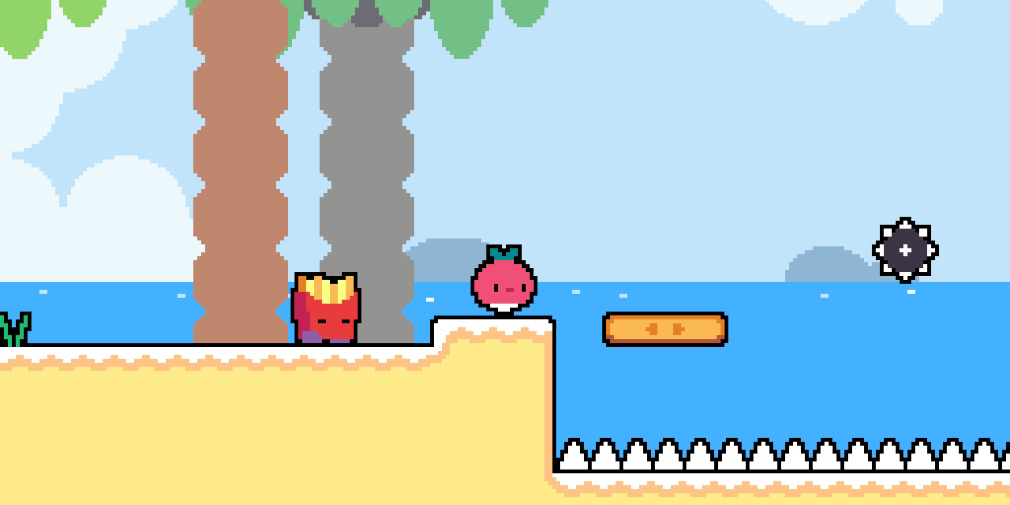 Every week, dozens of mobile games are released with little to no fanfare, pushed into a marketplace very few are capable of surviving. I’d like to change that, which is why I’m introducing Mobile Monday. Each week, this feature will focus on a handful of interesting mobile titles that go beyond the usual dreck clogging up the app stores.

One of the best mobile trends that doesn’t get nearly enough attention is the proliferation of cute platformers with generous payment options. They’re sometimes hard to find and chances are they won’t end up on the front page of any app store, but if you know where to look, you can find some serious gems. Developer Nitrome is usually a solid choice with titles like Spike City and Colorblind that are both well worth a download.

Dadish, from developer Cat Cup, is right in line with those other great mobile platformers. It features solid controls thanks to an update that fixed character movement, funny dialogue, a great difficulty curve, and well-designed levels that are perfectly bite-sized for the mobile experience. The game puts players in control of a dad radish, i.e. the Dadish, as he seeks out his kids who’ve all gone missing. Avoid spikes, pits, french fries, pizza slices, and more to get each little radish back.

If you’re looking for a simple, back-to-basics type platformer, this is it. The dad radish doesn’t have any attacks, all he can do is avoid damage with a double jump. Take a hit and it’s back to the start of the level, but that’s never too much of a burden.

Dadish is a free-to-play title with ads that can be removed for $3.49.

Farming sims are one of the most ubiquitous genres you can find on app stores. There are hundreds of examples, perhaps more, clogging up screens with their bright, beautiful colors and gameplay that’s usually the bastard child of Facebook classic FarmVille. If you want a good farm sim on your smartphone, Stardew Valley is inarguably the way to go, but Harvest Town looks to be making a good case for itself.

Currently in Early Access, Harvest Town has the look and feel of Eric Barone’s best-selling title at a much more enticing price of free-ninety-nine. I’m only about five in-game days into the title, but it’s easy to see this thing has lasting appeal. There are crops to grow, fields to till, villagers to meet, fish to catch, and more. The game plays perfectly on my Pixel 3A. There is a virtual joystick control option, though I find the default touch option works just fine. Access to anything in your bag is relegated to a responsive slide-bar and I haven’t had an instance yet where my actions were incorrectly registered by the game.

It’s also just gorgeous to look at. While the design of the world does hue closely to Stardew, the rich Japanese influence is enough to set it apart. Just don’t expect this game to be as inclusive as Stardew Valley as the game description explicitly mentions “heterosexual NPC.” As an Early Access title, I haven’t encountered too many bugs, usually just a problem with movement, but the translation needs a lot of work. None of the NPCs in town are that interesting yet and some of what they say comes across like broken English.

Harvest Town is a free-to-play title with many, many different ways to spend money. You can buy coins or diamonds, both of which are earned in-game. There is also a permit system that grants you a lot of diamonds and daily rewards. A 20-day permit costs $5.00 while a 30-day permit will set players back $11.99. There are also ads you can watch for daily bonuses.

The idea of a Souls-like on mobile platforms seems like a very bad idea and yet, Pascal’s Wager makes it look easy. Well, that is if you play it with a controller. Giant Network’s not-so-shameless Dark Souls clone arrived not long after iOS devices were given the ability to sync up with Xbox One and PlayStation 4 controllers, devices most people already have. It’s a good thing the game waited for that development to release because with touch controls it’s an absolute nightmare. Props to the person who completes the game using only the touchscreen because there’s no way in hell I’m even attempting that.

The story to Pascal’s Wager is as bad as the voice acting, which is among the worst I’ve heard in quite some time. A lot of different world-specific phrases and terms are thrown at players wantonly, but the gist of it is you play as Terrence as he travels with companions through a grimdark world full of monsters. Combat here is slow and methodical and it can be easy to see your life bar drop. You have a quick attack and a strong attack, as well as a short dodge and the ability to block/parry. Most enemies who line each level are quick to death, though some of these boss battles will put a hurting on you. Shrines let you rest and respawn enemies, perfect for grinding materials for the various items you can craft.

Unlike the series it so generously apes, the journey through Wager isn’t a solo quest. As you meet characters along the way, you gain the ability to play as them, each with their own combat style. It really shakes up the formula as does the sanity meter which, I’ll admit, absolutely broke me the during my first few attempts at beating the prologue boss. If you’re as bad at these types of games as I apparently am, know there is an easy mode you can unlock halfway through the first level.

The only real complaint I have about Pascal’s Wager is how quickly it eats my iPad battery. I’ll be lucky to get two hours in before I’m hooking it up to a charger.

Pascal’s Wager is available for $6.99. It is compatible with iPhone 6s and above, as well as iPad models with 2G RAM or more.