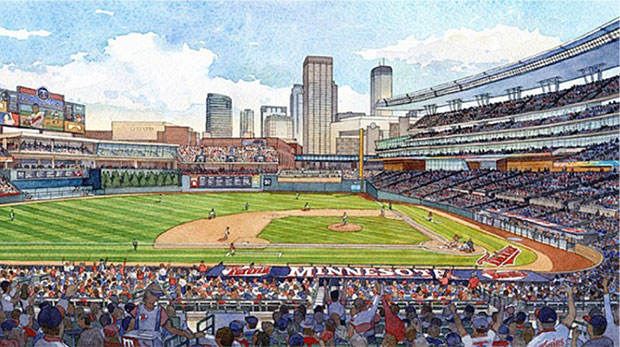 The New York Yankees eliminated the Minnesota Twins in Game 3 of their 2009 American League Division Series matchup last week, and that baseball game is the last one that will ever be played in Minneapolis’ Hubert H. Humphrey Metrodome. Next spring, the Twins will take the field for an outdoor home game for the first time in 29 years when they open the 2010 season in Target Field, which is still under construction.

The $522 million stadium won’t see its first regular-season action until April 12, 2010, but baseball videogames always release during the first week of March, and according to Kotaku, it takes Sony San Diego — the developer of the acclaimed MLB The Show series — almost four months to build a stadium in their game. That means that the dev team has to put together a digital version of Target Field without ever having seen it under real-world conditions, a tall task indeed.

Sony San Diego has been hard at work on MLB 10 The Show for quite some time now, and the studio explained to Kotaku the meticulous process of recreating stadiums in the game. Baseball is a peculiar sport in that the dimensions of the field aren’t standardized across all stadiums, and each of its ballparks is a unique venue that demands a staggering attention to detail. Whether it’s the white frieze that rings the top of Yankee Stadium, or the Coke bottle above Fenway Park’s Green Monster, you’ve got to make sure that it’s in the stadium’s digital doppelgänger.

Be sure to check out the full article at Kotaku for many more details on how Sony is doing its best to make Target Field look as good as it can in MLB 10 The Show.