The March release of 2K Sports’ Major League Baseball 2K11 came with the fanfare of the publisher’s second annual competition to throw an in-game perfect game for a $1 million cash prize. This time around, 2K tweaked the parameters of the contest in an effort to give more gamers a chance, pushing back the start date past baseball’s Opening Day and lowering the minimum age to 13. With an extra three weeks’ worth of practice, it certainly seemed possible that a less experienced player would have a shot.

“I didn’t know much about baseball going in,” said Brian Kingrey, the winner of this year’s contest, at a press event in a Citi Field suite during a Phillies-Mets game last week. “I knew about as much as, hey, you’ve got to hit the ball and then get home runs, you know?”

But the 25-year-old from Hammond, LA, a first-year high-school music teacher — guitar, piano, band, and choir — is much savvier than he might sound. Kingrey wasn’t a sports fan before this contest, but he drew on his love for e-sports to bone up on baseball and give himself the best chance at the million-dollar bounty. 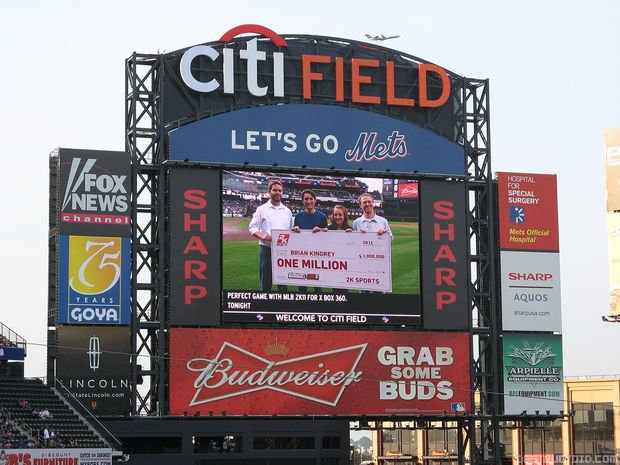 As a novice to both baseball and baseball videogames — he had never played a baseball game before — Kingrey knew that he was going to have to do his homework. Two weeks before the competition began, he traded in Marvel vs. Capcom 3 for MLB 2K11 and “started practicing like crazy,” about four to five hours a day. In addition, he went to MLB.com in order to gain a basic understanding of the rules of baseball. (Some of the intricacies escaped him: in a game of MLB 2K11, I watched him bunt a ball foul with two strikes — he didn’t know he would be called out.)

Kingrey’s research didn’t end there. He often watches competitive gaming live-streams, and his preparation for the competition was just as in-depth. He looked up batting averages and pitchers, and decided to play the Opening Day matchup of the Astros and Phillies, using MLB 2K11 cover athlete Roy Halladay. Kingrey’s research told him that the Astros were the best target for the right-handed Halladay because of their free-swinging lineup, which features only two left-handed hitters. His strategy during the game was to stick almost exclusively with Halladay’s deadly cut fastball, which moves away from righties and toward lefties; before each pitch, he shifted his fielders to the right so that even if a batter made contact, his chances of getting a hit would be very low. 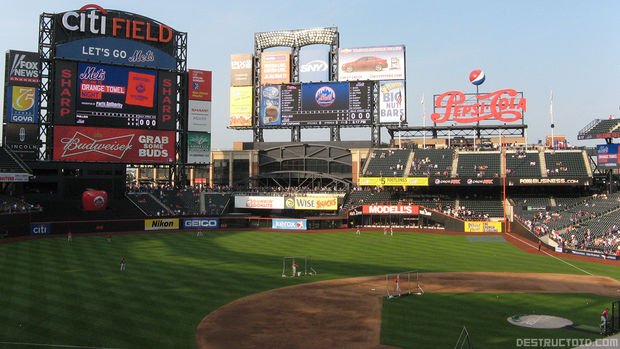 Like last year’s winner, Wade McGilberry, Kingrey achieved perfection on the first day of the competition; it only took him three tries in two hours. As it turned out, he was playing his current favorite game, League of Legends, when 2K Sports called with the news; he actually kept playing while on the phone because he didn’t want to lose his rating in the game. But 2K didn’t initially let on that he had won outright; they flew him to California under the pretense of being one of a few potential winners, and then revealed the truth once he got there.

Brian and his wife, Karyn, got married in October, and recently moved into a new house. To this point, the space in their kitchen that a refrigerator would usually take up has been occupied by a “little mini dorm fridge,” so a full-size fridge is first up on the Kingreys’ list of things to do with their newfound wealth. They don’t have any extravagant plans for the money, but it has already allowed them to help out a friend in need: Kingrey told me that he gave his current car, a Toyota Corolla, to a friend who can really use it; he’s planning to replace it with a Nissan Leaf. 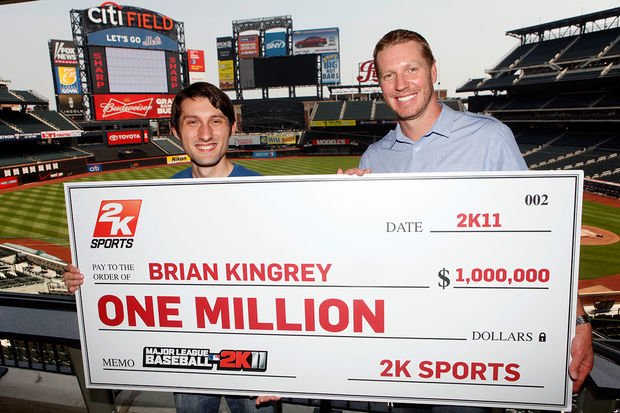 Once again, 2K flew the winner to New York City and put him and his wife up in a Manhattan hotel for a few days. In addition to meeting his million-dollar ticket, Roy Halladay himself, Kingrey took on a few journalists in MLB 2K11 to see if they could get a hit off of him. Last year, I was the only person who managed to break up McGilberry’s perfect game; I won a Mets jersey autographed by shortstop Jose Reyes for that feat. This time, Kingrey got two quick outs before giving up a walk and a single to me; when another contestant scored a double, I figured I was done.

But 2K was counting total bases, so technically, we were tied at two. In the next round, I picked up a single after Kingrey’s 1-2-3 inning against my opponent, and with that, certified myself as the reigning champion for two years running of breaking up million-dollar winners’ perfect games. (I’m actually not that good at videogames, I swear.) This year, 2K gave me a Halladay-signed baseball, quite the prize indeed. 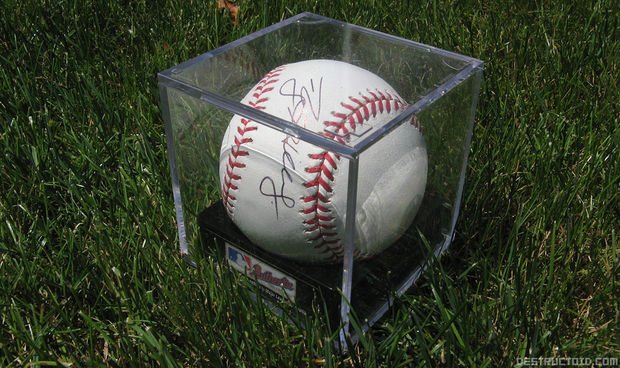 To top it all off, the Phillies-Mets game that we all watched was a good one. The teams were tied 3-3 going into the 9th inning, where Mets closer Francisco Rodriguez allowed three runs, to my delight. The Mets mounted a rally in the bottom of the frame, closing the gap to 6-4 before Daniel Murphy grounded into a game-ending double play with runners at the corners.

It was the kind of game that even non-fans of baseball might find exciting. But don’t count Kingrey among them anymore — winning this contest has clearly instilled a budding love for baseball in him. Getting to know the Phillies players in MLB 2K11 has made him a Phillies fan, even though he’s from Louisiana. “Now that I know Rollins, Polanco, and Chase Utley, and all of [the Phillies], I really root for them.” Thanks to MLB 2K11, he told me, “I got a new appreciation for baseball. It’s really an amazing sport.”

[Thanks to everyone at 2K Sports and Access Communications for their hospitality!]