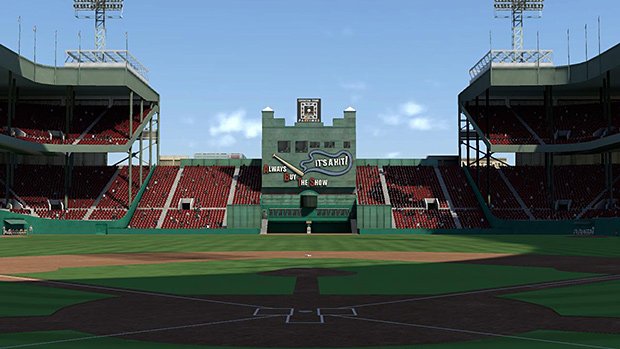 In my December preview of MLB 10 The Show, I mentioned that the game will include a number of classic stadiums that are new to the MLB The Show franchise, such as the Polo Grounds and Forbes Field. The fact sheet for the game mentioned these old ballparks as being part of the game — but unfortunately, that’s only technically true. Yesterday, a post on the PlayStation.Blog explained that the PS3 version of MLB 10 will offer a total of six classic stadiums (check out screenshots of them in the gallery):

The six sports venues will be on the MLB 10 game disc. If you pre-order the game at GameStop, Amazon, Best Buy, Wal-Mart, Buy.com, or J&R, you’ll get a free voucher with an unlock code for the stadiums. According to a reply from SCEA to a comment on the PS.Blog post, you will also be able to unlock the stadiums yourself — but you’ll have to achieve a Platinum Trophy in the game (that is, earn all of the game’s Trophies) in order to do so. (The MLB The Show games have been criticized in the past for their notoriously difficult-to-obtain Trophies.)

As someone who has no Platinum Trophies and rarely pre-orders games, I found this rather disconcerting. I contacted Sony San Diego to ask if there will be any other way to access these stadiums, and a PR rep told me that he believes that they “will be available for DLC at some point.” However, he could not confirm a release window at this time, so I’m left with the assumption that even if the stadium six-pack does eventually pop up on the PlayStation Store (whether for free or for purchase), it won’t be until some time has passed after MLB 10’s March 2nd release date.

So as it stands, your best bet is to pre-order MLB 10 if you want to play in the six ballparks listed above. It’s a safe move, though — the last two games, especially MLB 09, have been superb. “Always Buy The Show” indeed, eh?

Pre-Order MLB 10: The Show and Get Free Classic Stadiums [PlayStation.Blog]