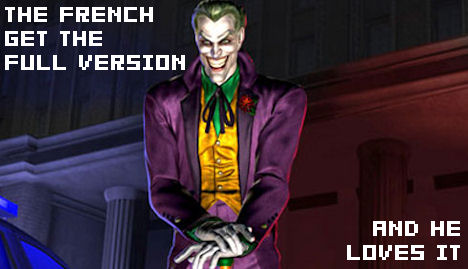 Here’s something you don’t see every day. A videogame has been censored, but it’s actually North America that has seen changes made, while the European version remains untouched. That game is Midway’s Mortal Kombat vs. DC Universe, and the edit in question concerns the famous Joker fatality that was reported to have been snipped in order to secure a Teen rating.

“That’s partly true [that the fatality has been edited] … You know, for North America we have a Teen rating, and teen really means 13 and above,” explains senior producer Hans Lo. “Thirteen is pretty young, you have to admit. For Europe we have a 15, 16+ rating – so it’s a bit different.”

Joker’s fatality revolves around the Clown Prince of Crime shooting his victim with a toy gun that reveals a classic “BANG” flag, before blasting them in the head with a real one. In the edited version, he lets the defeated opponent walk offscreen before finishing the act.

This is a small edit, but it’s bound to irritate some gamers, especially knowing that Midway made the concession for the sake of a T-rating. Are you particularly bothered at them gimping the only great fatality shown in the game so far, or is it too small a detail to worry about?