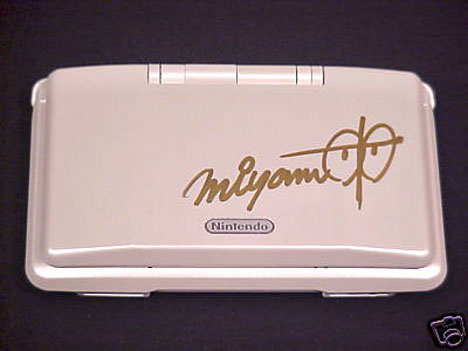 Legendary game maker Shigeru Miyamoto has the touch of gold not only in videogames, but also in signed game merchandise.

DS Phat systems go for next to nothing at my local game trading shops, but this one would probably pull in top dollar. Or wait. No it wouldn’t. Those as*holes offered some guy $15 for the first Lunar game for Sega CD. F*ck those guys.

This DS is “Pure White” and signed by Shigeru Miyamoto. The seller made his way into E3 2005 and got this valuable signature.

The ending price on the eBay auction? $1,625, sold to some hardcore fan in Sweden. It’s strange to think that ink that came out of a $2 marker could be worth so much.

I hate to be even less professional than I usually am, but the next time I see him, I’m having him sign something.

[Via GameSniped, who finds cool sh*t like this farting Yoshi]