It’s an odd thing. While I listen almost exclusively pretentious hipster music, I’ve been pretty lucky in checking out DJ music games this year. I’ve had hands-on (and off) time with Scratch: The Ultimate DJ, so I was dead interested in checking out what big boy Activision has in store for DJ fans this year. I have to say, DJ Hero is wildly different than what I expected.

That’s not bad! What I mean is, DJ Hero is a very different sort of music game. Nope, you won’t find a strictly hip-hop soundtrack or a controller that entirely emulates a turntable. Instead, you get a product that is about transforming music into something wholly different, a mash-up game that takes music from different decades and genres, and splices them together in completely new ways. It is surreal and unexpected, and the best part is there is always a mix that someone will like.

Hit the jump to find out what I did and didn’t like about DJ Hero.

Let us not beat around the bush: there are two DJ games coming out around the same time, with Scratch: The Ultimate DJ coming out early next year. Are they the same game? That, I can confirm, is a resounding “no.”

Scratch is a game focused on solely hip-hip, with gamers creating their own mixes and tossing their own samples into to the music. Plus, truthfully, while the gameplay in that game seems to be more simple, Scratch aims for a slightly more realistic bent with its authentic Numark controller. DJ Hero, in opposition, is a game all about the mash-ups and flashy gameplay. Its controller is much more game oriented. From the get-go we have a game that is far from reality, but seems to benefit from creating a unique idea of how DJing is supposed to feel.

For those not in the know, DJ Hero‘s gameplay is really, really different. All three of the buttons you need — green, red and blue — are tied to the scratch pad. Gems scroll down and you tap them out to the beat, with the blue and green representing parts of the two songs. Indicators on the blue and green tell the player when to scratch up or down, to hold a sustained drag, or scratch back in forth. The scratching is not terribly defined, and new players like myself tend to twitch out scratches, but better players almost look cool. 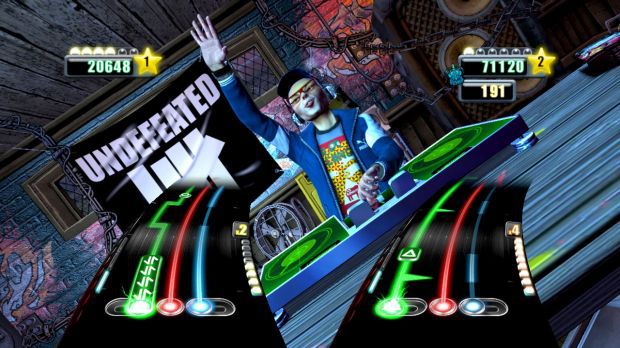 These by themselves are not too difficult, but when you take into account the crossfader, the whole game kicks it up a notch. The game will force you to slide the fader back and forth, and this wouldn’t be such a problem, except that the fader is very sensitive. Slide it just too far to the right or left, and the game will say your fader is off. I do wish that the fader was a little springier and quicker to return to center, but I’m afraid the game would be too easy. Hopefully this will become a non-issue with practice.

During certain portions of the mashups, you can play with audio samples by tapping the red gem, like “Yeaaaaah Boooyyye” or “WHAT!” being the more obnoxious examples. It is only during these specific moments that one is able to use these samples, so, honestly, they feel a little out of place. However, it is nice to see some type of freestyling, and the promose of future DLC sample packs are nice. One last feature is a knob that allows players to change the freestyle options. Certain portions of songs will let you manipulate the audio with this knob so that certain elements will fade in and out. It’s cool, but nothing much more exciting than the whammy bar on guitar controllers. Finally, there is the Euphoria button, which is the same thing as Star Power in Guitar Hero.

Now for the game. I’m pretty comfortable playing music games on a higher difficulty setting, so right away I cranked up the difficulty to an ass-kicking hard. It’s at this moment that the crossfader goes crazy, forcing you to slide back and forth all the time, and the scratching opportunities become very common. Mixing the two becomes an exercise in multi-tasking, and it’s actually pretty fun. While I wouldn’t say that it is harder or easier than a game like Guitar Hero, it is different. Unfortunately, I pretty consistently scored one and two stars across the night. 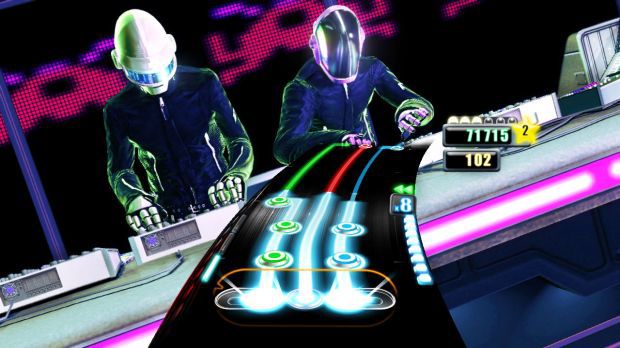 My most pressing problem with DJ Hero is that while there are over 90 mixes in the game, this is not representative of the actual number of artists and songs. You see, while Rihanna, The Killers, Paula Abdul, MC Hammer, Vanilla Ice, Eminem, Jay-Z, Daft Punk, Marvin Gaye and more make quite a list, when the same songs are reused in different mixes, the truth becomes slightly disappointing. Over 90 mixes does not mean over 90 songs. However, with DJ masters making the tracks, every mix sounds a bit different. DJ Jazzy Jeff, DJ AM, DJ Shadow, Grandmaster Flash, Daft Punk, Cut Chemist, DJ Yoda, Scratch Perverts and J. Period all contribute to the game’s soundtrack.

And that is not to say the music is bad — far from it. Some of my personal favorites from the night were Kanye West vs David Bowie, The Jackson 5 vs Third Eye Blind, and Vanilla Ice vs Paula Abdul. It can be pretty surreal, but the mixes proved to be all sorts of fun. Part of DJ Hero‘s charm will lie in discovering the wild and bizarre ways this music is mixed. 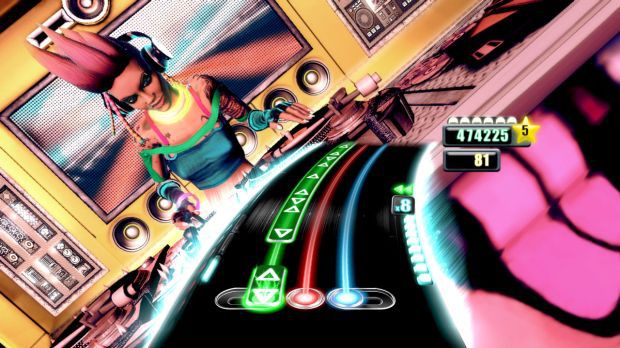 The multiplayer we checked out is pretty much just like any other versus mode seen in early Guitar Hero games, with two players duking it out for a higher score. Not much more than that. Sure it is fun, but the co-op Guitar vs DJ songs proved to be the most interesting. Rihanna’s “Disturbia” vs The Killers’ “Somebody told Me” is just one more example of this type of gameplay, with one player focusing on the mixing, and the other rocking out with a traditional Guitar Hero guitar.

So was I impressed? Very much so, actually. While this isn’t the most realistic DJ game coming to market, it is very much aware of its role to be an entertaining game. The music is hot, the gameplay is solid and varied, and it looks like the difficulty will remain for those looking for a high score and incessant beats.

While I am concerned that it is an expensive game, especially the special “Renegade Edition” costing $199, I’m sure music fans tired of rock music will find something they like. If you have the money and the love for mash-ups, this might just be the most interesting music game coming out this year.