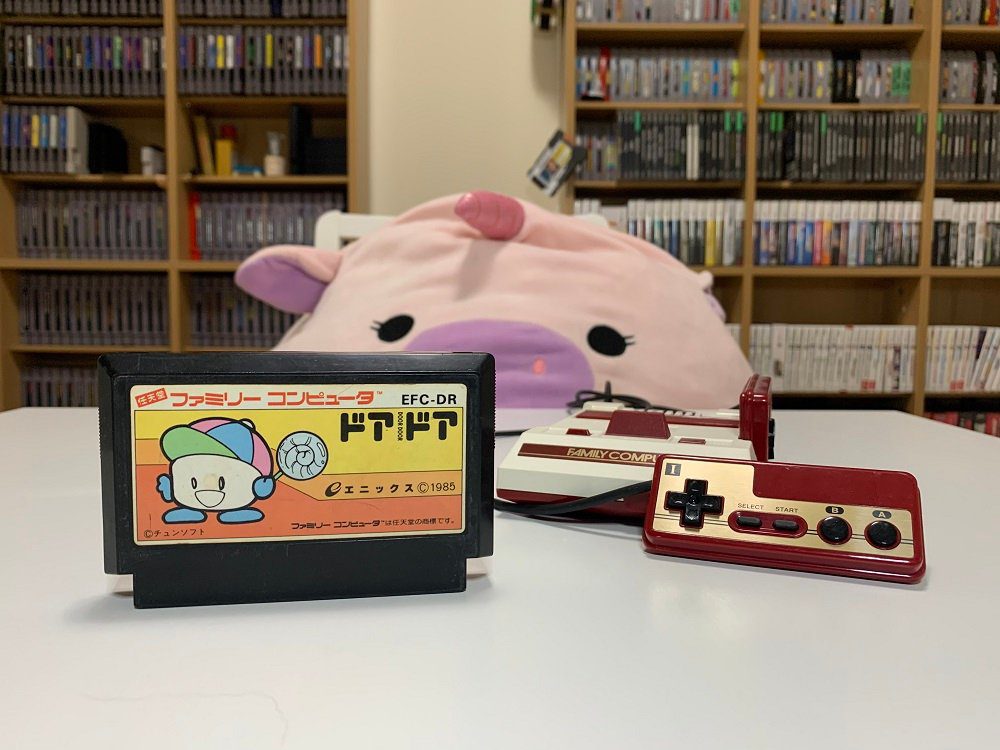 Can you shut up all aliens this Famicom Friday?

The official release date of the Nintendo Entertainment System was October 1985, but in truth, that was a test launch. Most people in North America didn’t have a chance to buy the console until Autumn of ‘86. At that point, the Famicom had been on the market for three years in Japan.

Three years is a lot of time to build up a catalog of games, and the Famicom certainly did that. Most of the important titles would find their way to North American shores, but many during these lost years of the 8-bit platform fell by the wayside, regardless of their relevance. Take Door Door, for example. It’s a game that’s ingrained in the Japanese console player’s mindset, but it’s practically unknown here. It was the title that helped launch Enix into a position as a major player that would be solidified by the release of Dragon Quest.

If that doesn’t tell you how significant this title is, let’s take a closer look.

Door Door is a concept by Koichi Nakamura, who entered it into a contest being held by the newly formed Enix. At the time, most game publishers developed their own games in-house, then released them as one entity, so the concept of picking up outside contractors and offering them royalties for their work was pretty novel. The title was first released in 1983 on the NEC PC-8801, a Japanese 8-bit home computer. It was then ported to various other computers until it finally landed on the Famicom, where it exploded in the vacuum that existed before Super Mario Bros.

The game features a little blob named Chun, who is being chased by a set of aliens. In order to save himself, Chun must open doors for the aliens to enter, then shut them once they’re inside. Something about opening doors for people really appeals to my Canadian mentality.

It may sound simple, and it definitely is in concept. However, if you go into it expecting to get by on your reflexes, you’re going to get trounced. While, on the surface, Door Door looks like a more action-based game like Pac-Man or Burgertime — and, indeed, there are clear similarities — using the same approach as you would with those titles quickly proves ineffectual as the game limits the number of doors.

It’s better to come to Door Door like it’s a puzzle game. The aliens are controlled by deterministic artificial intelligence, meaning that they react to what you’re doing in a somewhat mindless fashion. If you’ve ever watched a breakdown of Pac-Man’s ghost AI, you probably know what I’m talking about. Two of the aliens chase you directly, one reacts to jumps, and the other tries to take the scenic route. The trick to high-level play is therefore to learn how to corral the enemies into a tight group and then trap them in the same door. Sometimes, only one door is available, so this isn’t just a strategy, but a necessity.

There are 50 levels in all, but don’t expect a win screen. This is strictly from the arcade-dominated 8-bit era, so the game is entirely cyclical and mostly concerned with having you set an unbeatable high score. This means it’s more likely to resonate with people who enjoy the old-fashioned arcade mindset. I like the odd game of Ms. Pac-Man, Burgertime, and Space Invaders, but I’ve never really taken much time to try and master one. Same goes for Door Door. I haven’t seen level 50, but it’s fun to pick up occasionally.

A lot of the game’s charm comes from its detailed and colorful visuals. It’s actually somewhat interesting to see a game so well animated and packed with character in a 1985 title. The one downside is that the movement is weirdly choppy. This might be a holdover limitation from the PC-8801 release, but characters seem to snap a few pixels at a time. It’s nothing too distracting, but it’s interesting to see in a Famicom title, even of this vintage.

Door Door would not only help see the rise of Enix in the industry, but would also lead to Koichi Nakamura establishing his own contracting company, Chunsoft, named after the title character. This would lead to the creation of Dragon Quest, the various Mystery Dungeon titles, and Danganronpa. They’re maybe not the most influential of developers in today’s market, but the fact that they’re still trucking as Spike Chunsoft and releasing beloved games after all these years says a lot.

Despite being such a landmark game in Japan, one that is remembered with reverence, Door Door hasn’t seen much in terms of re-releases. It hasn’t hit a Virtual Console, for example, and is absent from Nintendo Switch Online. There was a mobile port for mobile phones in Japan through a service in 2004, but that’s the last we’ve seen of it.

Luckily, Door Door doesn’t use any Japanese in its screens, so it’s easily understood by English speakers. This is to the point where I don’t think there has been a release of a fan translation, as there isn’t anything to translate. It would be nice if it was easier to get a hold of here in North America, and it’s a bit of a mystery as to why it isn’t, but maybe the door isn’t completely shut on the possibility.