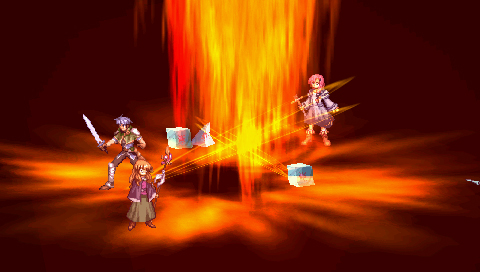 Usually when we get trailers for RPGs and the PR fellow sending them over says something about them “being really great” it turns out that they’re the same old stuff we’ve seen before. Lots of FMV, a bit of gameplay, a swelling soundtrack and some climatic ending. Thus, when downloading the trailer for upcoming PSP RPG Mimana Iyar Chronicle I was expecting to have to BS a few paragraphs about how it looked interesting. Then I watched it. You should too. Not quite what you were expecting, was it?

Cleverly different trailers aside, we haven’t really talked about Miman Iyar Chronicle at all here at Destructoid so below you’ll find some screens for the game as well. The game is said to be an old school style RPG with an new school real-time fighting system. That’s probably perfectly exemplified by the 2D hand drawn sprites doing real-time battle on quasi-3D planes. Plenty of dungeon crawling, humor and a giant overworld are promised to show up as well.

Piquing anyone’s interest? If so, the game lands this month.