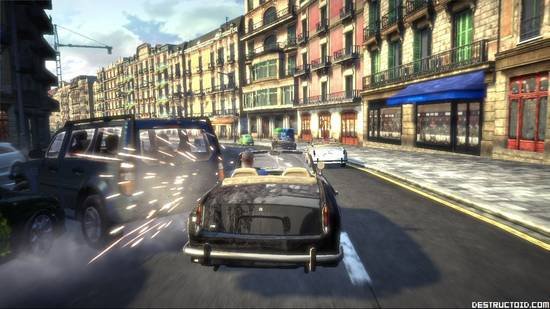 Originally announced back in the beginning of 2006, things have been quiet on Midway’s front regarding their title, The Wheelman. The company broke its silence last night, showing us the latest, and giving us a hands-on with some of the game’s more interesting gameplay mechanics.

Now simply called Wheelman, the title puts you in the shoes of profession getaway driver Milo Burik (who shares actor Vin Diesel’s voice and likeness), as you tear ass through the streets of a digital recreation of modern Barcelona. With a focus on a cinematic, “ultimate car chase” experience (the team drew inspiration from films such as Ronin, The Bourne Identity, and Vanishing Point), Midway and Vin Diesel’s Tigon Studios are hoping you’ll want to tag along for the ride.

Best described as an odd mix of Burnout 3: Takedown and Grand Theft Auto, Wheelman is set to ship this fall for the PlayStation 3 and Xbox 360. Hit the jump for my early impressions of the title and to find out just what in the hell “vehicle melee” is. 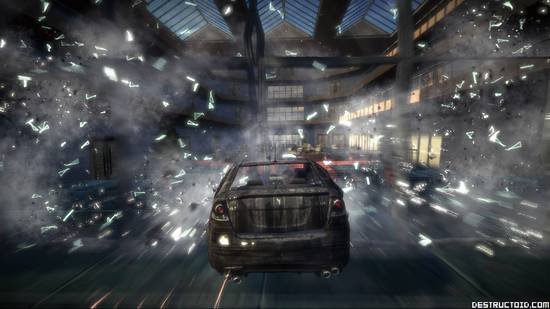 One of the missions being demonstrated was one that takes place early on in the game, called “Frantic.” Essentially a playable tutorial to help players get accustomed to the streets of Barcelona and how the world of Wheelman works, as Milo Burik you’ll be acting as the getaway driver on a bank heist that’s attracted more attention than intended. While the city will be open for exploration (getaway missions such as these can be completed using any path you desire), this first mission directs you down narrow pathways, and over and through police road blocks.

The first minute or two of “Frantic” gives you a good idea of what Midway and Tigon Studios are going for. At one point, you nail a jump over a flaming truck. At another, you’re driving down a once peaceful Barcelona street, smashing through tables and fruit carts. It’s high-intensity, with pedestrians leaping out of the way of your speeding vehicle, and varying amounts of debris and carnage being left in your wake. Oh, did I mention you’re being chased by the cops?

This is where “Vehicle Melee” comes in to play. By pressing either left or right on the right analog stick, you can make your car juke in that particular direction. Yes, I said you can make your car juke. By doing so, you can smash into cars on either side of you, and with enough patience, you can not only run them off the road, but make them go up in a flaming wreck. While this particular mechanic seems to completely negate the fact that you’re racing through a realistic recreation of Barcelona, it fits in perfectly with the game’s completely unrealistic cinematic chase-style driving. 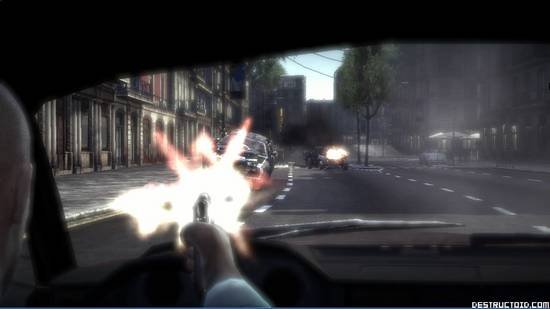 It might sound silly on paper, but in practice, the “Vehicle Melee” adds an interesting element to the frenetic chases that will presumably be littered throughout the game. Nailing a perfectly time “Vehicle Melee” attack feels good, and doesn’t slow down the action for the second.

In addition to “Vehicle Melee,” when equipped with a gun, you’ll also be able to fire from your vehicle while driving, as well as perform a number of “super moves.” While there will be a number of the “super moves” in the final build, only two were shown to us at Gamers’ Day. The first is the “Cyclone,” a move which cause your car to do a complete 180, slowing down time, and allowing you to fire at vehicles on your tail. By lining up your reticule on the vehicles “weak spot” (the gas tank, for instance), the well-placed bullet can cause your pursuers to spontaneously combust in a matter of seconds. The second super move, the “Aim Shot” serves a similar function, only you’ll be aiming in front of your speeding car.

A later mission we’re shown introduces the games on-foot gameplay, which allows the digital Vin to wield a variety of weapons, and shoot at Romanian gangsters and the game’s other slimy characters. Let me cut to the chase (no pun intended) – running around and firing at people feels good, employing the kind of over-the-shoulder aiming mechanics I suppose we’ll be seeing in every third-person game from here on out. But as the game is called Wheelman, the real focus seems to be on the driving aspects, with the on-foot combat sort of thrown in to tie one car chase to another. 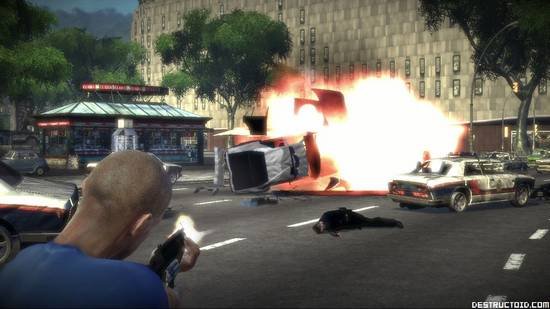 Unsurprisingly, the game uses Unreal Engine 3, so once polished and optimized, things should start looking pretty. As it stands now, the city seems a bit vacant, and the character models look like they could use some serious cosmetic work. But we’re still months away from seeing a finished product, and if the game’s narrative is as strong as Midway are promising (Tigon Studios’ Hollywood-caliber talent are providing the script), Wheelman could prove to be the closest thing videogaming’s seen to a “popcorn flick” in a long time.